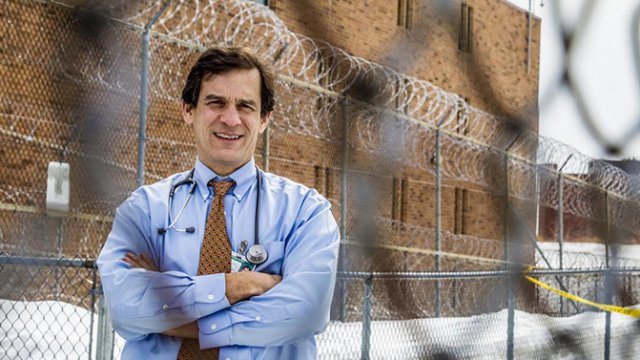 He warns of a "tinderbox scenario" of many detainees getting sick all at once, which would overwhelm already strained hospitals.

"This whole disease is terrifying. And at least for the rest of us, we have something we can do. We can socially isolate, we can wash our hands. But those people have nothing they can do. So it's a terrifying situation. So, right now is the time to do something before the outbreaks get in there," said Dr. Josiah "Jody" Rich, an infectious disease specialist.

Rich treats coronavirus patients all day at a Rhode Island hospital. He's also a Department of Homeland Security consultant as an expert in prevention of disease in detention facilities. He urges President Trump's administration and elected officials around the country to release as many detainees as possible before it's too late.

"It's not just ICE detention. It's any detention facility, any place you have people congregated together. They're all eating in the same cafeteria. They're all walking in the same hallways, all opening the same doorknobs, all staying very close to each other, so that you don't have a way to distance yourself. There's also very limited hand-washing capabilities. And once it gets in, it's very hard to stop it, and very hard to even slow it once it gets in," Rich said.

In federal prisons, 10 inmates have tested positive for the coronavirus. In response, the White House has directed prison leaders to expand the use of home confinement. At the state and county levels, thousands of inmates have been released. But ICE has yet to shrink its existing detention population despite two known cases of coronavirus among detainees. Thousands of medical professionals have also called for the release of nonviolent and vulnerable immigrants.

"We have a very narrow window of opportunity to avoid a lot of unnecessary infections occurring at the same time. And we have relatively central authority to do that in the immigration detention system as opposed to every county jail, every state correctional facility," Rich said.

ICE has the authority to release most immigrants awaiting deportation or asylum hearings. Out of 38,000 detainees currently in ICE custody, less than 15,000 have criminal convictions. The agency announced last week that it will "delay" arrests and use "alternatives to detention" except for those who have committed certain crimes or pose a public safety risk. But the policy shift doesn't apply to nonviolent immigrants already behind bars. The Trump administration also closed the southern border to asylum-seekers to reduce the intake of new detainees.

"Our goal is to not even bring people who cross the border illegally into those facilities at all. It's to go straight back to the ports of entry to return them to Mexico," said Ken Cuccinelli, acting deputy secretary of the Department of Homeland Security.

ICE says it screens all new detainees for the coronavirus, consults with local health departments to assess the need for testing, and isolates those "with fever and/or respiratory symptoms."

"ICE has a standard medical process. No one comes into their facility without medical processing. And they have tremendous quarantine capabilities that they exercised literally for thousands of people last year at the height of the crisis," Cuccinelli said.

Rich says he understands that releasing detainees, even nonviolent ones, is politically risky. But he says from a public health perspective, the benefits far outweigh the risks.

"You don't want somebody, a bad guy, coming out of a detention facility and hurting people and killing people and causing trouble. But here, there's a different definition of public safety, because everyone that gets unnecessarily infected on the inside and has to come out to an outside facility is going to be taking up a bed or a ventilator that could be used by other people," Rich said.

"Every day, I've been seeing patients very sick in the hospital with this disease. It's a very real thing. We just have to do everything we can to prepare," he added.