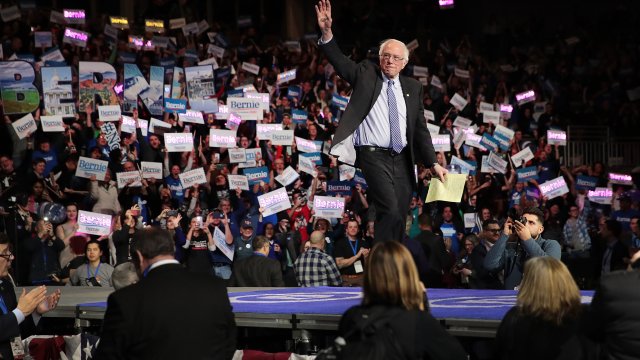 The presidential candidates are looking to New Hampshire to separate the front-runners from the also-rans after the Iowa caucuses failed to declare a winner.

When it comes to New Hampshire, Bernie Sanders of Vermont and Elizabeth Warren and Deval Patrick of Massachusetts are hoping to cash in on their New England roots.

With Bernie Sanders coming from Vermont, I think that gives him a certain affinity in particular with folks on the western side of the state. It’s not that people vote for you because of where you’re from but i think if you're from nearby you have a certain affinity you just instantly understand them in terms of culture, in terms of their priorities, in the way that somebody from Michigan or Nevada or California might not.

History suggests that for candidates in New Hampshire, it helps to be from a neighboring state.

There was Democrat Michael Dukakis in 1988, John Kerry in 2004 and Republican Mitt Romney in 2012. All are from Massachusetts.

He's not likely to replicate that win in 2020 — the current field is much larger than the two-person contest of 2016.

In 2016, Bernie benefited from the fact that he was the only game in town if you had any sort of reservations about Hillary Clinton . . . this year it's Bernie vs. the non-Bernies.

About 43% of New Hampshire’s voters are independent and can vote in either party primary, making the outcome of the race unpredictable.

And some political experts in the state say it's less about where you're from and more about what you stand for.

Bernie Sanders, his popularity is not necessarily based on the geography but the fact that he gives to the liberal part of the Democratic Party, which is a core constituency, the sort of purest unadulterated progressive liberalism of any of these candidates.