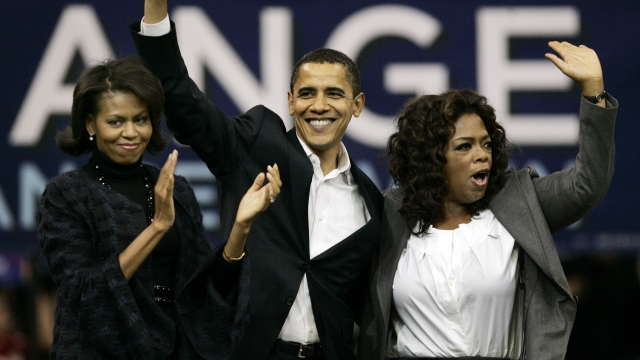 John Legend: "Now, I could've kept this to myself."

Celebrity endorsements have been a big part of Democratic presidential candidates' strategies for years. And that includes this election season. Some of the biggest names endorsing Joe Biden include Eva Longoria, Lin-Manuel Miranda, Tom Hanks and Cardi B.

David Jackson, Professor of Political Science at Bowling Green State University: "Initially, there was just sort of a thought that: 'Hey, a celebrity endorsement is a great thing. It gives energy, enthusiasm, helps raise money, helps persuade people.' But it's a lot more complicated than that."

Rebecca Weintraub, Professor of Communication at University of Southern California:  "I don't think they move the needle terrifically, but in a close election … it might matter just enough."

Jorge Barraza, Professor of Psychology at University of Southern California: "It's not a simple yes or no, it depends on the type of celebrity and how the voters are viewing that celebrity."

"Nearly 9 in 10 people said no celebrity endorsement would sway their vote" according to a recent poll from Morning Consult and The Hollywood Reporter. That may seem pretty conclusive, but it's worth noting that it's really hard to be aware of what influences us.

Barraza: "In the abstract, it's easy to say that a celebrity might not impact us … but it's almost like a little nudge that puts over the edge that can possibly motivate our behavior."

Experts say the ideal celebrity endorsement centers around three things: how well known a person is, their likeability and their credibility. Case in point? When media mogul Oprah Winfrey endorsed then-Sen. Barack Obama in the 2008 presidential race.

Oprah Winfrey: "For the very first time in my life, I feel compelled to stand up and to speak out for the man who I believe has a new vision for America."

Weintraub: "Oprah Winfrey had a huge impact on Obama's first election in 2008 — to the tune of a million votes is what they attribute it."

Jackson: "A celebrity who doesn't do a lot of endorsing might be more effective with their first few endorsements. So Oprah Winfrey hadn't done a ton of endorsing before she endorsed Obama. And when she did, well, then it had a big effect."

Other celebrities haven't been so successful.

Taylor Swift: "I need to be on the right side of history."

Some speculate that Swift's endorsement may have galvanized GOP voters in the conservative-leaning state.

Weintraub: "When it's a surprise, it catches our attention, which is why I think Taylor Swift created such a reaction from both sides of the aisle."

This year, the Biden team is relying on celebrities to help break through to voters throughout the mostly virtual campaign. Think of it as reaching people who may not want to tune into a Biden live stream — but would be interested in seeing him with Megan Rapinoe or Lin Manuel Miranda.