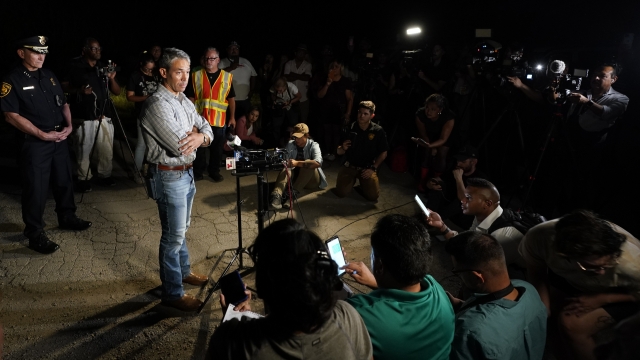 SMS
Disturbing New Details In San Antonio Migrant Crisis
By Adi Guajardo
By Adi Guajardo
June 28, 2022
At least 50 migrants are dead after being abandoned in a tractor trailer in the unforgiving Texas heat.

“So the plight of migrants seeking refuge is always a humanitarian crisis. But tonight, we are dealing with a horrific human tragedy,"  San Antonio Mayor Ron Nirenberg said.

Charles Hood is the Chief of the San Antonio Fire Department.

“We’re not supposed to open up a truck and see stacks of bodies in there. None of us came to work imagining that," he said.

Shock, disbelief, and heartbreak still pouring in, in the wake of Monday’s tragedy in San Antonio.

At least 50 migrants are dead after being abandoned in tractor trailer, in the unforgiving Texas heat.

The death toll is still ticking up hours after the horrific scene was discovered on a lonely back road.

The San Antonio Fire Department radio can be heard saying, "Looks like quite a few of them are already deceased. We’re going to start sorting through the ones that are currently breathing and start going through and checking each one for respirations, to make sure we haven’t missed anyone. There’s no further evidence of life on that truck."

William McManus is the Chief of the San Antonio Police Department.

“A worker who works in one of the buildings up here behind me, heard a cry for help. Came out to investigate. Found a trailer with the door partially opened. Opened them up to take a look. And found a number of deceased individuals inside," McManus said.

Tragic situations like these sadly have been seen before along the southwest border.

That’s more than double the number reported the previous year, and the highest death toll recorded since the agency started keeping track in 1998.

Many of those deaths are due to heat exposure.

Temperatures were near 100 degrees Monday.

In south Texas, triple digits are common in the summer and it's where illegal border crossings are plentiful.

From there, they disperse across the U.S.

"I want to express my deepest condolences to the families of the Mexican migrants, the Guatemalans, the Hondurans, who died from asphyxiation in a trailer. It’s a tremendous misfortune," Mexican President Andres Manuel Lopez Obrador said.

Officials in Texas are condemning what happened here in San Antonio.

But who’s to blame is the topic of fiery debate.

His opponent in the upcoming race for governor, Beto O’Rourke, had a different take.

He tweeted: “We need urgent action — dismantle human smuggling rings and replace them with expanded avenues for legal migration.”

The President blamed what he called a “multi-billion dollar criminal smuggling industry.” In an apparent response to criticisms from the republican party, he denounced what he called “political grandstanding around tragedy.”

His press secretary told reporters in Washington the border is closed, which is part of the reason people use smuggling networks.

Gustavo Garcia-Siller is the Roman Catholic Archbishop of San Antonio.

He wrote on Twitter: “Once again, the lack of courage to deal with immigration reform is killing and destroying lives. We do not learn.”

San Antonio Mayor Ron Nirenberg, as he guides his city through this gut-wrenching tragedy, put the blame on federal lawmakers.

"Clearly Congress’s inability to reform our immigration system is causing, or is manifesting, in a lot of ways that are simply tragic," he said.