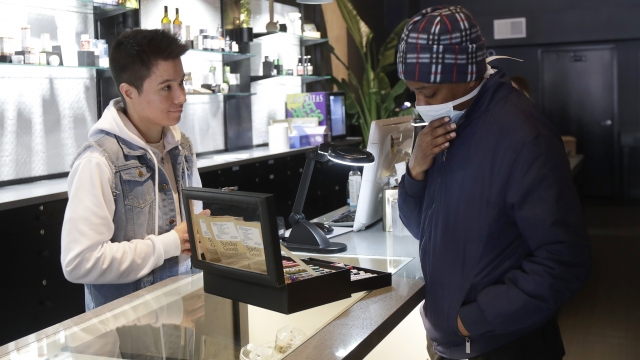 The coronavirus has forced most businesses to close their doors as more governors are ordering residents to shelter in place.

But in nearly all of the 33 states with some form of legal marijuana market, dispensaries are still open because they are considered essential services.

There are a couple of reasons experts say dispensaries are being considered essential services during the pandemic. For one thing, many people use marijuana as a medicine, even if they don't have a prescription for it.

"There are a number of people that use cannabis for both medical and therapeutic reasons that don't necessarily want to sign up for the medical program, be that because of extremely high registration costs or, you know, a number of other reasons, perhaps their qualifying conditions aren't covered by the existing medical program," said Morgan Fox, media relations director for the National Cannabis Industry Association.

And Fox says shutting down legal dispensaries would likely drive people to the illicit market where the product is potentially unsafe.

She says the fact that her shop can remain open along with other essential businesses like pharmacies and grocery stores reflects a major cultural shift in Americans' perceptions of weed.

"I think it's just such a beautiful point of progress that we're in a position now that cannabis businesses are seen as essential as we're still fighting for legalization and other places. That's actually a great case that we'll be able to make in those other states," she said.

But not everyone thinks dispensaries should be allowed to remain open during the pandemic.

"We're encouraging people to go smoke weed right now in the middle of a public health crisis where we have a virus that impacts people's lungs, their respiratory functioning," said Luke Niforatos, chief of staff at Smart Approaches to Marijuana. "We have long lines outside of these pot dispensaries, which is a significant risk to the public because we know that this virus can spread very easily through these lines in proximity to other people."

Officials in San Francisco and Denver quickly reversed orders for pot shops to close down after the orders prompted long lines and panic buying at dispensaries.

Conine says the state of Michigan is restricting in-store purchases at dispensaries during the pandemic and she says she and her team at Om of Medicine are taking extra precautions to keep their customers safe.

"We are able to stay open, which is wonderful. But part of that is that we can't have anyone else in the lounge or in our facility other than employees. So we are just strictly curbside pickup right now," Conine said.