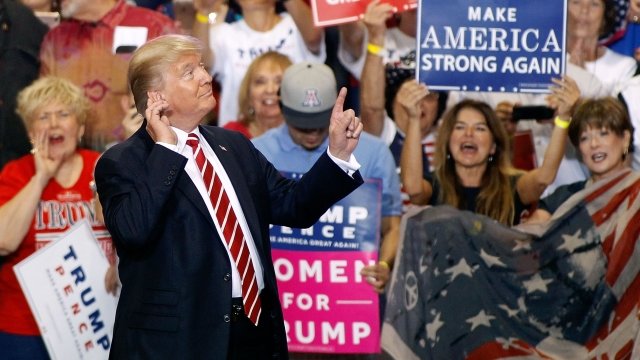 For the first time in months, President Trump's approval rating is trending up — but just a little bit. A new Politico/Morning Consult poll found the president is at a 43 percent approval rating. That's up from 39 percent just last month. Other polls found a similar modest uptick.

Trump's approval numbers tanked after a series of self-inflicted scandals hit his administration — mostly because of his handling of the violent protests in Charlottesville. Especially his doubling down on his first statement that equated white supremacists with left-leaning protesters.

The most recent polling suggests Trump's bump is due to Republicans coming back to his camp, as well as some independents. In the past month, he received 7 percent more support from Republicans, putting him at 80 percent. Among independents, he went from 35 to 40 percent approval.

The federal response to recent natural disasters seems to have been a huge factor in those increases. That's pretty normal, actually. After a huge natural disaster or terrorist attack, Americans tend to rally behind the president as patriotism begins to really kick in.

These numbers also show Trump is generally still not adding supporters outside of his own base. But it kinda seems like he doesn't want to: His habit of doubling down on controversial statements seems to fire up his voters, even as it turns off more outsiders.

Either way, his popularity is still historically low for a president at this point in his presidency. Let's do a quick comparison to his most recent predecessors at this point. President Clinton wasn't much higher than Trump at 46 percent, Bush 43 was at a whopping 86 percent (that was due in large part to the Sept. 11 attacks) and President Obama was at 52 percent.