Why Diplomacy Is Deteriorating Between Turkey And The Netherlands 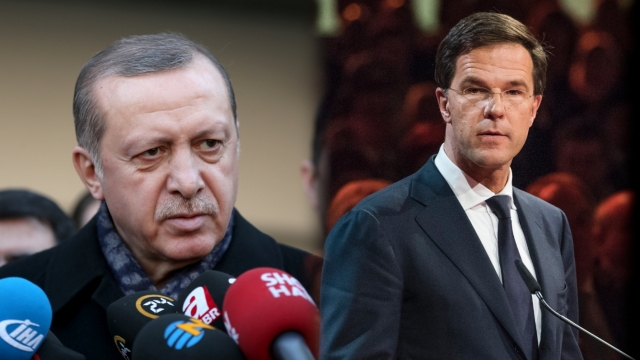 SMS
Why Diplomacy Is Deteriorating Between Turkey And The Netherlands
By Jake Jones
By Jake Jones
March 12, 2017
The problem stems from Turkey's upcoming referendum vote that could expand the powers of the Turkish president.
SHOW TRANSCRIPT

A dispute between Turkey and the Netherlands is getting pretty intense and prompted weekend protests in both countries.

The disagreement is tied to an upcoming constitutional referendum in Turkey. It would eliminate the county's prime minister and concentrate power in the presidency.

The referendum is Turkish President Recep Tayyip Erdoğan's attempt to regain control over Turkey after a failed military coup last year. Erdoğan has fired nearly 100,000 civil servants and ordered more than 30,000 people to be arrested since a group within the Turkish armed forces known as the Peace at Home Council tried to oust him in July.

Erdoğan has been trying to campaign in European countries with a large Turkish population. More than 5.5 million Turks live abroad, and most can vote on the referendum.

But the Netherlands — along with Germany and Austria — doesn't want Erdoğan or his surrogates campaigning within its borders.

Leaders say they're worried a Turkish campaign rally could result in "compromised public order and security" and worsen an already tense process of immigrant integration into European countries.

Protests in Turkey remained peaceful; demonstrators sang songs and chanted slogans outside the Dutch consulate. But in Rotterdam, the city in the Netherlands where the Turkish consulate is located, protests devolved to riots. Police used water cannons and horseback charges to disperse the crowd. Police arrested 12 protesters, and seven people were injured, including a police officer.

Erdoğan called the Dutch government "Nazi remnants" and "fascists" for blocking his surrogates from the country.

Turkey's referendum vote will be April 16.