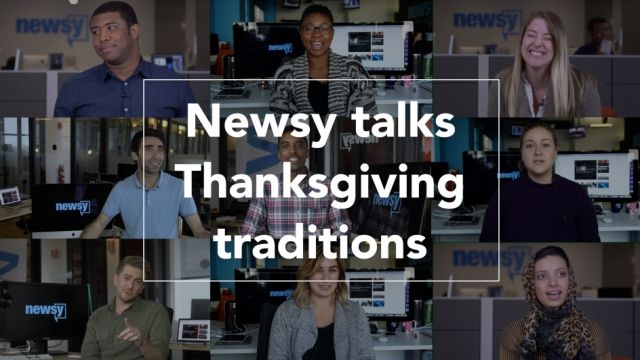 From turkey (roasted or fried) to cranberry sauce (canned or fresh), some Thanksgiving traditions are quintessential.

Newsy staff talk about their different Thanksgiving traditions. First, we asked: What's on the menu?

NEWSY'S EUGENE DANIELS: Oh! My favorite thing is that we get two meats. My mom does a ham, and my dad fries a turkey.

NEWSY'S NOOR TAGOURI: Your traditional turkey and cranberry sauce and stuffing and pies, but we also have falafel, borek —  which is like spinach  —  or meat pies.

NEWSY'S CODY LAGROW: We centered the entire meal around the driest, most flavorless meat that exists.

SEE MORE: Since The First Thanksgiving, American Food Has Been Immigrant Food

LAGROW: Does it matter?

DANIELS: Canned. I like the jellied one, and I can literally just sit and eat the whole thing alone.

CARPENTER: I'm ashamed to say that I like canned.

TAGOURI: I would never eat cranberry sauce out of a can.

NEWSY'S KATE GRUMKE: When it comes out and it's like **sound effect**

CARPENTER: I call it dressing. Some people have never heard of it being called dressing, but from what I understand, it's stuffing when you put it inside the turkey, and it's dressing if it's outside of it and just in a pan.

NEWSY'S DANIELLE DIETRICH: My family calls it stuffing even though we don't stuff the turkey because that's a terrible idea if you're deep-frying a turkey.

BRYANT: My family always holds hands. We gather around in a circle, we hold hands and we talk about what we're thankful for.

TAGOURI: We would always play Taboo. Like the boys vs. girls.

NEWSY'S BEN SCHAMISSO: My friends and I love celebrating it just 'cause it's the cool American thing to do.

ROHLWING: We always watch football, but then when it's halftime during the game, we go out and play our own game of football.

LAGROW: Thanksgiving to me is always a day where you meet new people [and] learn about their stories and their traditions as well. It's about togetherness! Come on.