Dieting At A Young Age Might Lead To Harmful Health Habits 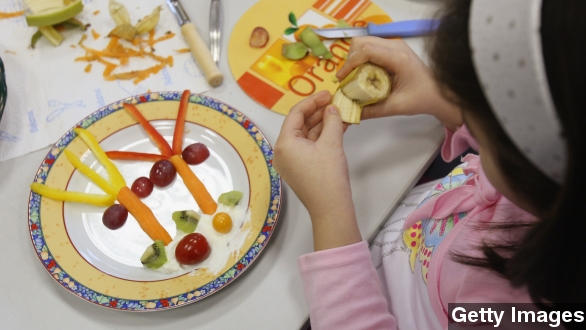 By Briana Koeneman
July 30, 2014
Researchers say women who diet at a young age are at greater risk of developing harmful health habits, including eating disorders and alcohol abuse.
SHOW TRANSCRIPT

Women who start dieting when they're younger might be at a higher risk for some dangerous, long-term health consequences. (Via Getty Images)

According to a new study presented at a meeting of the Society for the Study of Ingestive Behavior in Seattle, dieting at a young age could lead to harmful health habits later in life.

HealthDay quotes one of the study's researchers: "The younger a woman was when she started her first diet, the more likely she was [later] to use extreme weight control behaviors — like vomiting or laxative misuse. ... She was also more likely to misuse alcohol and be overweight or obese when she reached her 30s."

​To come to this conclusion, researchers asked more than 1,000 women when they first started dieting. They then followed up with those women for 10 years to study their dieting habits and health as time went on.

One of the study's authors told CBS the age at which participants first started dieting ranged from 3 to 26. She said, "Younger age of dieting predicts greater problems 10 years out from college."

Now, what the study isn't clear on is why women who diet early in life are more prone to developing these unhealthy habits. (Via Getty Images)

But doctors say it might have something to do with their social environment or genetic makeup.

DR. DYAN HES, PEDIATRICIAN AND OBESITY SPECIALIST: "They have this ideal that is maybe unattainable, and they do extreme things like purging and taking laxatives and diuretics and following fad diets." (Via CBS)

As WebMD points out, these fad diets usually restrict food choices and sometimes even require special food or pills.

But despite the serious health problems fad diets and eating disorders can cause, young women often feel the need to try them to conform to a certain physical standard.

​According to this chart from Health Research Funding, more than half of teenage girls are or think they should be on diets.

The study's authors say the most effective way to prevent outcomes like this is to teach children how to make healthy choices early on. (Via Getty Images)

These choices include what you might expect — more exercise, less time in front of the TV and on computer and eating more fruits and vegetables. (Via YouTube / ProjExploration)

Doctors say this new research is a reminder that extreme diets aren't good for your health in the long run. They say the most effective way to maintain a healthy weight is to make the proper lifestyle changes with the help of a professional.