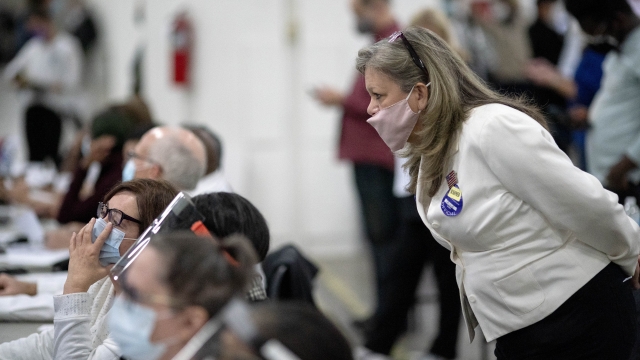 Post-Election Day, Newsy explores what was different about poll watching this year and how it and poll challenging actually work.

Whether in dropping off a ballot or casting in-person Tuesday, voters may have noticed something near the polling station or ballot box known as a "poll watcher." It's someone appointed by a political party to monitor election sites, keep track of turnout and make sure their party had a fair chance of winning.

It's not a new feature in U.S. elections, but it's a role that's gotten a lot of extra attention leading up to this year's midterms.

Both parties use poll watchers, but there's been particular focus on recruitment from supporters of former President Donald Trump and Republican party officials. The chairwoman of the Republican National Committee, Ronna McDaniel, said 30,000 poll watchers were trained ahead of Election Day, with plans to ramp up the number. Arizona Republican Secretary of State nominee Mark Finchem urged followers on social media to "watch all drop boxes" and made a conspiracy reference to Democratic donor George Soros.

The more than 100-year-old legal practice of poll watching dates back to when elections in 19th-century America tended to be much more wild than today. Political parties offered food and drink at polling sites, sometimes including bribes and intimidation, with even threats of beatings not that uncommon.

After a particularly messy election in 1888, a number of reforms passed to bolster voter safety and clamp down on polling place chaos. That included things like secret ballots, distance requirements for campaigners, and now all 50 states have laws that ban poll intimidation. Poll watchers must also follow various requirements and meet qualifications, though these vary by state.

But that was the key dispute going into the 2022 midterms: When does "overseeing a fair election process" turn into voter intimidation?

One example of this played out as early voting began in Arizona in mid-October. A pair of armed and masked men in tactical gear guarded ballot drop boxes. They're part of Clean Election USA, a group that identifies as an "election monitoring" organization. A U.S. District Court judge, one that was appointed by former President Trump, issued a restraining order to the group to stay away and that they couldn't openly carry weapons.

Aside from a few minor incidents involving poll watchers, this year's primaries were largely uneventful from a poll watching perspective, even in states that seemed to be the focus of poll watching training, like Michigan.

In the Arizona county where the armed men were seen by ballot boxes, the sheriff also reported that not many cases followed.

"Actually, we've seen what's a hopeful response," Maricopa County Sheriff Paul Penzone said. "I know that there's been a diminished number of, I'll call them, poll watchers, as my understanding. There hasn't been a presence of armed poll watchers."

Although no high-profile incidents of voter intimidation like this were reported Tuesday, it's unclear how much the perception of poll watching and intimidation may have complicated voting or even kept voters away.

One Reuters/Ipsos poll found that two in five U.S. voters said they were worried about violent threats and intimidation at the polls ahead of the election this year. Many election workers and officials have faced a rise of threats since the 2020 presidential election and either quit or opted not to volunteer this year, contributing to poll workers shortages nationwide. A number of counties held extra training sessions this year for poll workers worried about disruptions or violence from poll watchers.

As the issue of election integrity continues to be a topic on many voters' minds, the debate over restricting voter access and intimidation is sure to continue past this election cycle.

Meanwhile, election fraud in the U.S. has been frequently proven to be extremely rare, and the presidential election results in 2020 have been verified as accurate. Legal challenges to the 2020 results failed in state and federal courts, and no evidence of widespread voter fraud has been found by the numerous audits conducted at multiple levels of government by both Democrats and Republicans.