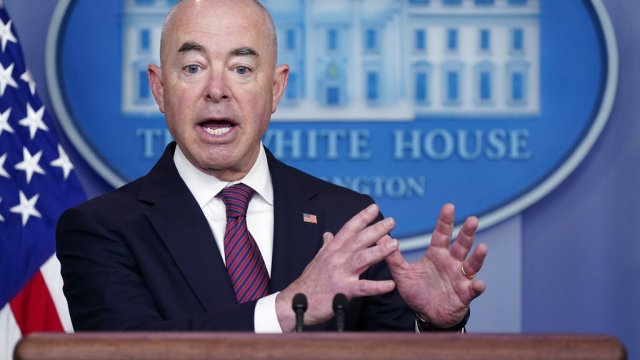 Key members of the president's cabinet will head to Capitol Hill today to talk money.

The Homeland Security Secretary Alejandro Mayorkas will have to explain why his department needs $97 billion.

According to the proposal released by the White House, some of the budget for DHS would include $2.5 billion for cybersecurity and infrastructure security,  $3.5 billion for DHS’s climate resilience program,  $7.1 billion for TSA, $11.5 billion for the Coast Guard, $15.3 billion for U.S. Customs and Border Protection, and $8.1 billion for Immigration and Customs Enforcement (ICE).

Mayorkas is also expected to be grilled by both sides of the aisle about the Biden administration's handling of Title 42 at the U.S. - Mexico border.

Title 42 is the Trump era COVID provision which allowed the vast majority of the folks seeking asylum in the U.S. — who crossed the southern border illegally — to be turned around pretty much immediately after crossing the border.

Now, if they get rid of Title 42, as the Biden administration said, it would allow those migrants to have their court cases heard in the U.S. and probably increased the amount of a legal immigration to the U.S. and to seek asylum in the United States.

"When the Title 42 public health Order is lifted, we anticipate migration levels will increase, as smugglers will seek to take advantage of and profit from vulnerable migrants," Mayorkas said Tuesday.

This is unpopular with not only Republicans, but also moderate Democrats, many of whom are campaigning for reelection in the 2022 midterms and are concerned that a wave of migration to the southern border would hurt their reelection chances and would be politically damaging.

More than 1.8 million migrants have been turned away under Title 42, which was issued by the Centers for Disease Control and Prevention under former President Donald Trump.