This Detained Immigrant With Cancer Was Saved By Complete Strangers 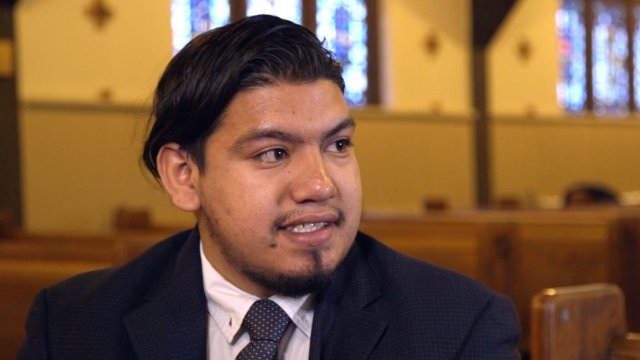 SMS
This Detained Immigrant With Cancer Was Saved By Complete Strangers
By Ben Schamisso
By Ben Schamisso
April 17, 2018
A doctor, a lawyer and two congregations in the Chicago area provided a Guatemalan immigrant sanctuary from hardship and deportation.
SHOW TRANSCRIPT

In his dual fights against cancer and deportation, Donal Eduardo Valiente Marroquin, or "Lalo," has been supported by a group of complete strangers who came together to save his life.

"Being in prison with cancer, I had to fight on my own because there was absolutely no one there to support me," Lalo said. "I'm now learning to live with it, thanks to the support of all these people who have a great meaning in my life. They are wonderful people."

Since last December, Lalo has called an apartment in the basement of a church in Oak Park, Illinois, his home. Before that, the 22-year-old had spent a couple months behind bars in immigration custody, awaiting deportation. Border officers in California scooped him up in October after he crossed the border without a visa.

Lalo said he fled Guatemala because people were trying to extort him and threatened to kill him.

"Gangs came to my [hair-salon] business and extorted me and asked for my money. If I didn't pay, they were going to kill me. They started threatening me with firearms and fired at my business," he said.

The journey to the U.S. was difficult, Lalo said.

"You get hungry, you get cold, you get hot, and you also confront death with what is known as 'The Beast,'" Lalo said. "That's the train that travels with many immigrants from Mexico to the United States border.

"I saw people falling from the train and getting their legs cut off by it. Others died because immigration agents halt the train, so when people feel it slowing down, they jump off. And some fall under the train and die," he said.

After picking him up in California, Immigration and Customs Enforcement first transferred Lalo to Arizona and then to a detention center near Chicago. One day, Lalo collapsed in his cell. Doctors at a nearby hospital later discovered he had a rare form of cancer.

"I've never seen anyone with the kind of advanced thyroid cancer that Lalo had," said Dr. Steven Singh. "Anyone in the United States would have had this workup long before it had already gotten to their lungs."

To stop the cancer from spreading, Singh and his team removed Lalo's thyroid. Lalo stayed in the hospital for 11 days. The two law-enforcement officers who guarded Lalo at all times — and shackled him to his hospital bed — told Singh not to contact anyone on Lalo's behalf. That's all standard procedure for incarcerated patients.

"It's actually a safety issue, and so I understand that instinct, you know, for example, people who are gang members, there may be rival gangs who want to come into the hospital to hurt them," Singh said.

But when Singh found out that Lalo was a detained immigrant rather than a gang member, he alerted local immigration rights groups — with Lalo's consent. And from then on, everything changed.

"Had that doctor not made that call, he probably would have never found us or found anyone to help him," said immigration attorney Mony Ruiz-Velasco.

As soon as Ruiz-Velasco heard about Lalo from Singh, she took on Lalo as her client and started his asylum application.

"When I went to talk to him and explained to him what the process was, he right away said: 'I can't go back. If I go back, I'll be killed. And if I'm not killed, then I'll probably die now from this cancer diagnosis,'" Ruiz-Velasco said.

"They don't have the health care system down there and people to take care of this," Singh explained. "If he was sent back, he would absolutely have died from cancer."

Toward the end of Lalo's hospital stay, the two officers guarding him left, leaving Lalo with no place to go and an order to appear in court for his deportation hearing. Fortunately, Ruiz-Velasco had already arranged for two local churches to provide him sanctuary.

"Many, many people are in situations similar to Lalo. For us, to do it was a relatively simple faith-based decision," said the Rev. Eric Biddy of St. Christopher's Episcopal Church in Oak Park.

"Lalo is like a member of the family," Biddy said.

And Lalo said he has plans for his future in the United States.

"I want to learn English; I want to continue my studies. I also want to help many people in need, just like I was in need," Lalo said.

It's hard for Singh to predict how the young immigrant will respond to his medical therapy. But at least, Singh says, he now has a clear conscience.