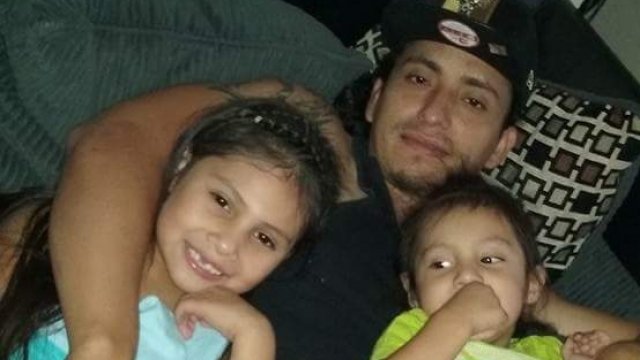 A detained immigrant is suing ICE for, he says, violating his civil rights during an arrest. But the legal barriers for faulting ICE agents are steep.

In March, six Immigration and Customs Enforcement agents arrested Wilmer Catalan-Ramirez, an undocumented immigrant from Guatemala who had lived in the U.S. for a decade. His partner, Celene Adame, recorded parts of the raid on her phone.

"They slammed my husband against the ground," Adame said. "They attacked my family, my children, my 3-year-old boy was crying; he was screaming, 'Please don't give them my dad.'"

At the time of the arrest, the father of young American children was recovering from serious wounds he sustained two months before during what his lawyers call a random drive-by shooting. But ICE officers ignored his repeated pleas to lighten up and fractured his shoulder, according to court documents.

"The agents arrested him when he woke up. He asked them, 'Please handcuff me here' because his arm was paralyzed and he couldn't move it to the back, but they didn't care," Adame said.

In May, Catalan-Ramirez filed a lawsuit against ICE for the officers' excessive use of force, unlawful entry and unreasonable seizure.

"Even if you're here undocumented, you do have your civil rights and you can't let a federal agent trample all over those rights," said Vanessa del Valle, one of Catalan-Ramirez's civil attorneys.

With the lawsuit, she hopes to highlight the importance of protecting immigrants' constitutional rights and of holding ICE officers accountable for their actions.

"Whether or not you believe that someone who's here illegally should be deported, that doesn't matter to the fact that when ICE agents go in to arrest someone, they have to treat that person with respect and dignity," del Valle said. "They have to follow the rule of law.

But there isn't a road map yet on how individuals can successfully sue federal agents for civil rights violations. That's due to high legal barriers, a lack of precedent and the fact that many undocumented immigrants avoid unwanted attention.

"A lot of these people obviously are living here in fear, and they don't know that they even have the opportunity to sue ICE agents," del Valle said.

ICE targeted Catalan-Ramirez because the Chicago Police Department included him in a gang database. But Catalan-Ramirez's partner and lawyers say he was never part of a gang.

That's why along with suing ICE, Catalan-Ramirez is also suing CPD and the city of Chicago. The lawsuit says the city's "over-inclusive" gang database is "arbitrary" and discriminates against black and Latino men. And since the database is private, the public has no idea who's on the list or how they got there in the first place.

"There's no process by which the immigrant can contest their inclusion in the gang database and get themselves off the gang database," said del Valle. "If someone is picked on a minor traffic violation and is wrongfully and racially profiled and put into the gang database, that person then will be targeted by ICE."

The U.S. House of Representatives just passed two bills that take a stance on sanctuary cities and illegal immigration.

In 2012, Chicago Mayor Rahm Emanuel signed an ordinance to make Chicago the "most immigrant-friendly city in the country."

The law protects undocumented immigrants by preventing the CPD from collaborating with ICE. But that only applies to immigrants who don't have pending or prior felony convictions, don't have an outstanding criminal warrant and aren't in the city's gang database.

The city of Chicago didn't reply to Newsy's emails about the lawsuit. And an ICE representative refused to comment on the case "due to possible pending litigation." Catalan-Ramirez is also suing the local jail where he's currently detained for failure to give him the medical treatment he says he needs. Newsy reached out to jail officials, who also declined to comment.

While Catalan-Ramirez is fighting to hold ICE and the city of Chicago accountable, he's doing that while also fighting another battle — his possible deportation.

The Trump Administration Might Be Looking To Expand Deportation Powers

Officials are reportedly weighing a proposal that would give more freedom to expedite deportations.

Immigration attorney Diana Rashid is helping him stay in the U.S.

"Had Wilmer, Mr. Catalan-Ramirez, not come to the attention of the news media and we hadn't gotten involved," Rashid said. "He may have been removed very, very quickly to Guatemala with a fractured shoulder, with all of these medical needs, without really much attention at all.

Catalan-Ramirez has a deportation order that dates back to 2006 when he was arrested and deported for working in the U.S. illegally.

"He did not have an attorney — did not know or understand whether he may have been eligible for any form of relief, including asylum," Rashid said.

He came back a few months later and has been living in the U.S. illegally ever since.

Rashid is asking a judge to toss out the deportation order because she says Catalan-Ramirez's life could be in danger if he returns to Guatemala. But Rashid says his inclusion in the gang database hurts his chances of staying.

Catalan-Ramirez may still have a chance to legally live and work in the U.S. because he was the victim of that random drive-by shooting we mentioned earlier and is willing to help the police solve that crime. And his civil lawsuit will continue even if he's deported.

But Catalan-Ramirez isn't just the subject of a lawsuit. He's a partner and a father, and leaving is a possibility his family might have to deal with.

"Right now, we don't have a specific plan," Adame said. "Like my husband says, 'If I have to go back, you'll need to stay here for a while.'"

"He wants our children to grow up and receive an education here. They have been distressed because of what might happen to their dad," she said.

"'For how long will he be away? Will we never see him again?' These powerful questions that the kids ask. I sometimes don't know how to answer them. You tell them to wait, to be patient, to be strong children. But how can you tell children to hold tight and wait until their father is released?" Adame said.