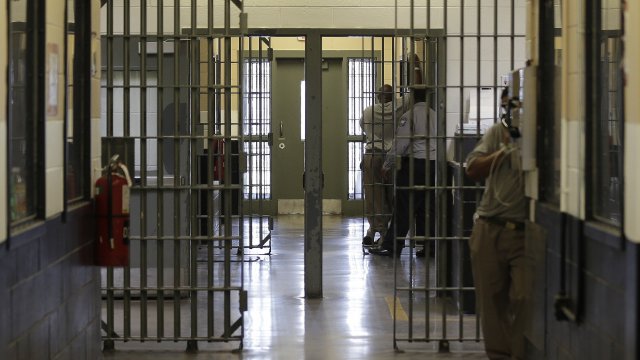 SMS
Despite Justice Reform, Number Of Inmates Serving Life Still Rising
By Jamal Andress
By Jamal Andress
February 17, 2021
About 203,000 Americans are currently set to die behind bars. In 1970, there were less than 200,000 people in America's entire prison system.
SHOW TRANSCRIPT

As the inmate population has exploded in the U.S., so, too, has the number of people facing life imprisonment.

According to a new study by the Sentencing Project, one in seven U.S. prisoners is serving a life sentence or "virtual life" sentence, meaning more than 50 years. If you narrow that to Black inmates, the number jumps to one in five.

Renaldo Hudson has had a whirlwind of a life, experiencing the highest highs and the lowest lows the criminal justice system has to offer.

Hudson was sentenced to death for a crime he fully admits to committing. He confessed to robbing, stabbing and ultimately killing a neighbor in his apartment complex nearly 40 years ago.

Hudson turned his life around after a stint in solitary confinement. He said all he had to listen to was a Walkman tape player.

After that point, Hudson got his GED then a bachelor's degree in a Christian studies. He severed ties with gangs in the prison and went on to create his own mentorship program called Building Blocks that boasts nearly 500 members.

HUDSON: "So you're absolutely correct when you said that my change wasn't predicated on me looking to be set free. It was completely motivated by me saying, 'I will not die with the world saying he was the most deserving of death.'"

In 2003, with just two days left in office, former Illinois Gov. George Ryan commuted the death sentences of all 160 inmates on death row to life without parole.

HUDSON: "When I walked outside of that prison I breathed for the first time in 37 years."

As one of very few who has received not one but two governor's pardons from the most severe punishments America has to offer, Hudson says the two aren't that different.

HUDSON: "People don't like telling the truth about the death penalty, which says, 'We [the state] will pay for the poison to actually kill you.' Life without the possibility of parole says, 'We're going to kill you, and we'll just release you once you die.'"

While public support for the death penalty has steadily fallen over the past 25 years, 60% of Americans support life imprisonment as a preferred alternative. And the number of people serving life without parole has jumped 66% since 2003.

But advocates and many experts say that harsh sentences like life imprisonment don't actually serve as a deterrent to crime.

For Hudson's part, he says he is living proof no one is irredeemable.

HUDSON: "I can't even act like I don't understand why society fears us. But we're more than that. We're also your brothers and your cousins and your uncles and your fathers. And many of us have come to a place to say, 'Hey, I'm sorry that I wasn't a better person. But I have the potential to be better.'"