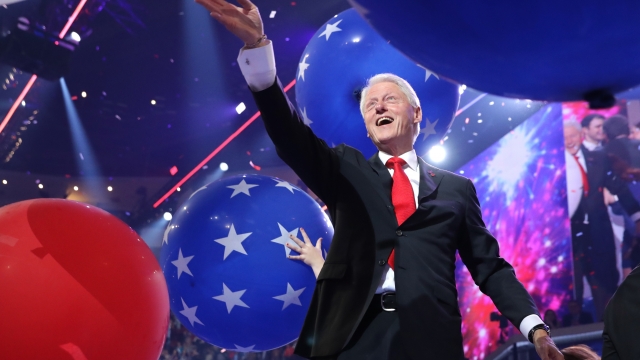 "We must stop the politics of personal destruction," President Bill Clinton said in 1998.

There's probably no political comeback story more interesting than President Bill Clinton's. On Dec. 19, 1998, the House of Representatives voted to impeach the president for perjury and obstruction of justice in the Monica Lewinsky scandal.

"To the president, I would say, 'Sir, you had done great damage to this nation over this past year,'" Rep. Bob Livingston said.

He became the second president, after Andrew Johnson, to actually be impeached. But five weeks later, the Senate voted to acquit Clinton, saving his presidency in the process.

But despite months of investigation and trial, Clinton's approval rating never took a hit. It actually only got higher, reaching 73 percent at the end of 1998.

That might be because the unemployment rate hit its lowest point in 30 years, with 115 consecutive months of growth.

Since leaving office, the former president has done what every other modern ex-president does. He built a library, wrote a memoir, went on speaking tours and created a foundation in his name.

And despite scandal after scandal, Clinton's post-office approval rating remains the highest of any living ex-president.

Oh, and there was the whole standing by his wife as she tried to break that highest, hardest glass ceiling. During Hillary Clinton's time in the Senate and as secretary of state, her husband spent some time in the background, playing the dutiful spouse role, all while focusing on his own complicated legacy.

And for each of Hillary Clinton's races for the White House, Bill Clinton has hit the campaign trail, bringing some controversy with him.

"So you've got this crazy system where all of a sudden 25 million more people have health care," Clinton said about Obamacare.

Now that he's not going to be moving back to his old house as first dude, it's not really clear what's next for Clinton. One thing we do know he'll be doing is being the dutiful political spouse again — this time representing New York as part of the Electoral College, voting for his wife for president of the United States.