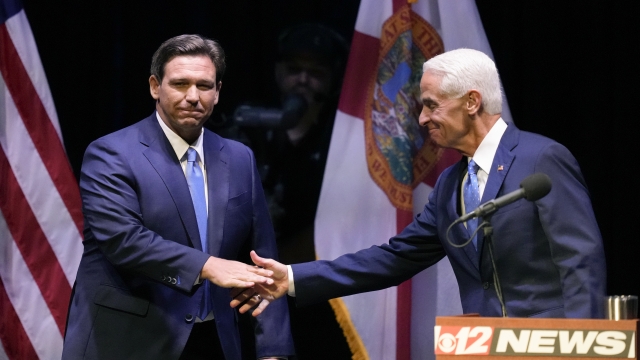 Monday's lone gubernatorial debate between current Republican Gov. Ron DeSantis and Democratic rival Charlie Crist focused on everything from inflation to hormone therapy for minors.  But the main highlight was when DeSantis refused to commit to serving another full second term if reelected.

Crist accused him of being too distracted by his national political ambitions to lead properly. DeSantis skirted several attempts by Crist to get him to say he'd serve another full four-year term.

“I know that Charlie is interested in talking about 2024 and Joe Biden, but I just want to make things very, very clear: The only worn-out old donkey I’m looking to put out to pasture is Charlie Crist,” DeSantis said of his 66-year-old opponent.

There were several heated clashes during a raucous debate that covered the COVID-19 pandemic, crime, education and abortion.

"You think you know better than a doctor," Crist said. "You want to be the judge and you want to decide what people can do with their own health."

DeSantis — who was once incredibly outspoken on the topic of abortion — wouldn't say whether he would support banning the procedure entirely.

"I'm proud of the 15-week legislation that I signed," he responded.

The Florida governor’s race may not be the nation’s most competitive election this fall, but it is no less consequential for DeSantis, a 44-year-old Harvard-educated Republican who could launch a presidential bid in the coming months. He hopes to use a strong reelection victory on Nov. 8 in Florida, a state he carried by just 32,000 votes out of 8.2 million cast four years ago, to demonstrate the breadth and strength of his support.

DeSantis has benefited from demographic shifts across Florida, a perennial swing state that has shifted to the right during his first term. Former President Donald Trump carried the state by more than 3 points in 2020 and Republicans now hold a registration advantage of nearly 300,000 voters.

Monday’s debate offered voters in Florida and beyond a rare opportunity to see DeSantis under pressure. Like many leading GOP officials across the nation this fall, he has limited unscripted moments in recent months, save for periodic interviews with friendly conservative media.

The candidates faced each other from behind wooden lecterns at Sunrise Theatre in Fort Pierce. Both men seemed to relish the hourlong fight, which was interrupted repeatedly by the rowdy audience.

The Republican governor specifically defended his record to bar transgender girls from competing on public school teams intended for student athletes identified as girls at birth. He also fired back against Crist's criticism of laws DeSantis signed limiting discussions of race and sexual orientation in schools and his opposition to gender transition treatments for minors.

Yet DeSantis has delighted his supporters over and over with his extraordinary willingness to fight — whether facing political adversaries, the federal government or powerful Florida businesses. Crist, a former Republican governor who most recently served as a Democratic congressman, has tried to cast himself as a moderate alternative to lead the perennial swing state.

Over and over, DeSantis sought to link Crist to President Biden, whose popularity is sagging in Florida and across the nation. “Charlie Crist has voted with Joe Biden 100% of the time,” DeSantis said, referring to the "Crist-Biden agenda."