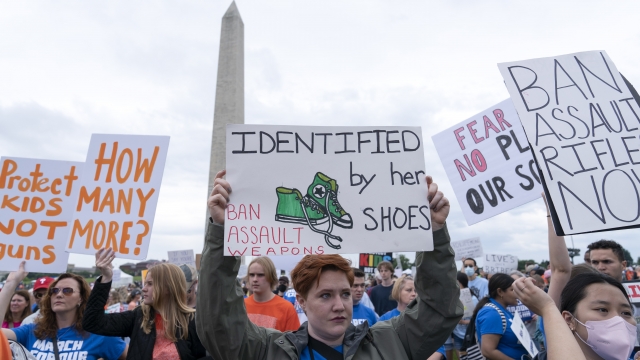 The father of Joaquin Oliver, a student killed in the mass shooting in Parkland, called for students to avoid class until gun laws are passed.

Some say they’re hopeful this time is different, as they call for action in the wake of mass shootings and community gun violence.

Across the country, and in the nation’s capital, thousands of people converged for March For Our Lives rallied.

The second event of its kind since 2018, when the youth-led movement started after 17 people were killed at Marjorie Stoneman Douglas High School in Parkland, Florida.

“All Americans have a right not to be shot, a right to safety,” said March For Our Lives Co-Founder David Hogg.

The renewed calls for firearms reforms follows mass shootings at an elementary school in Uvalde, and a grocery store in Buffalo.

Garnell Whitfield’s mother among those killed in Buffalo.

“Why are we sitting here pretending like we don’t have larger problem? These are ignorant individuals but there are even sicker and more ignorant systems, and people in high places, that are arming them, that are loading the guns, that are radicalizing these people. They are fueling with weapons and fueling them with hate-filled rhetoric … we demand the passage of an anti-white supremacy hate-crime bill along with sensible gun legislation,” said Whitfield.

People demanded Congress to act on gun laws, calling for action on the Hill and action through voting,

something President Biden pointed to.

“Yes, keep marching. It's important. Look, this has to become an election issue. The way people listen, Senators, Congressmen, So, people say ‘I'm gonna…this is gonna affect my vote.’ Too many people are dying needlessly,” said President Biden.

The father of Joaquin Oliver, a student killed in the mass shooting in Parkland, called for students to avoid class until gun laws are passed.

“I was Hoping to avoid having to attend a march like this one … ever again. The reason I’m here is that our elected officials betrayed us,” said Manny Oliver.

Here, some believe this time is different though …

“Because this isn’t about politics. It’s about morality. Not right and left, but right and wrong, and that doesn’t just mean ‘thoughts and prayers,’ that means courage and action,” said Yolanda Renee King.

The day of action took place in hundreds of cities across the country, in D.C. people of all ages speaking out.

“Gun violence is just wrong in general,” said a child who attended the rally in D.C.

“it’s just really disheartening to have to calm my children’s fears over and over and over again when these attacks happen in school,” said a mother who attended the rally in D.C.

And as people gather, the lives lost remembered by some here.

During the rally, there was a brief moment of panic when some in the crowd started running away.

A March For Our Lives spokesperson says someone near the stage disrupted the moment of silence and that there was no threat to the audience. Park police says the person was detained noting no weapons were involved.