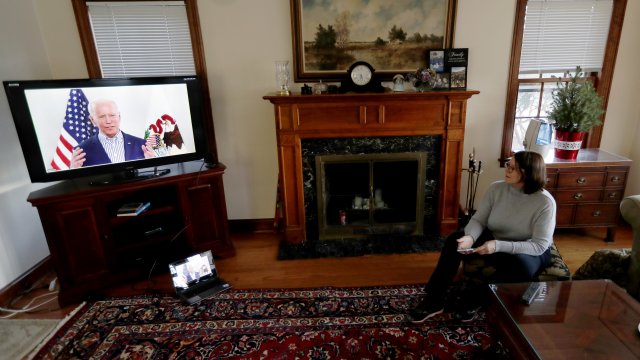 A campaign once filled with big rallies and decisive primary victories has been relegated to a basement in Delaware thanks to the coronavirus.

"The Biden campaign is facing two things that people haven't had to face before. First of all, the questions around whether we're going to have a general election and how it's going to play out. And the second thing is we still don't really know how he's going to finish the primary and become the Democratic nominee," said Democratic strategist Simon Rosenberg. "These are hugely disruptive things for any campaign to deal with."

More than a dozen states have postponed primaries -- most pushing back until May or June as officials scramble to figure out how voters can cast ballots safely both now and in the fall.

It has also cost the Biden campaign exposure at a time when President Trump has seen an uptick in approval amid the coronavirus response.

And another headwind for the campaign -- fundraising as the economy takes a downturn.

Kempner has co-hosted two virtual fundraisers for Biden with more in the works.

The full financial impact on the Biden campaign is not yet known. But Act Blue, the tool Democrats use to raise money online, told Newsy in the last two weeks of March it saw a 13 percent drop in fundraising for House candidates, and a six percent drop for Senate hopefuls.

Republican candidates face the same challenges. But the campaign coffers of President Trump and the Republican National Committee dwarf what Biden has in the bank.

Democrats, however, feel confident Biden will have the resources he needs to compete in November. And many say any potential bump the president sees for his handling of the pandemic will fade.

"I think in general, the landscape favors the Democratic Party. But, boy do we have a long way to go. And this is going to be an extraordinary year for the country and an extraordinary political year ahead," said Rosenberg.