Democrats Vying For Vacant Senate Seat In Ohio Ahead of Primary 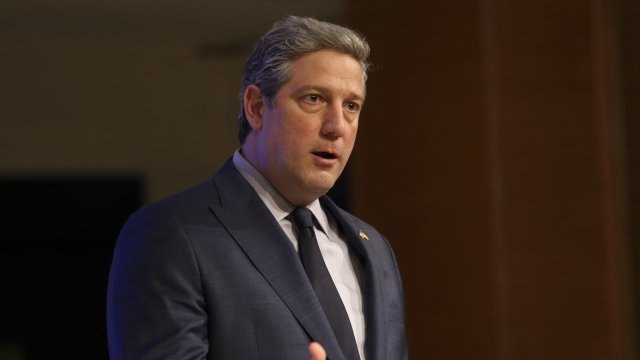 In Ohio, voting is already underway ahead of the May 3 primary in the race to take the Senate seat currently held by outgoing Republican Rob Portman.

Democrats there know they have an uphill battle to woo voters in a state President Trump won twice.

Democratic frontrunner Tim Ryan says he up for the challenge. While Ryan has been a reliable ally of the president in Washington, he is showing a willingness to distance himself from an unpopular president on the campaign trail.

"The exhausted majority is ready for some sanity — somebody to bring the state and country together," Ryan said.

NEWSY'S NATHANIEL REED: Do you think the president's doing enough on inflation?

According to a February Emerson College / The Hill poll, the president has just 40% job approval in the buckeye state.

REED: Are you seeking President Biden's endorsement? Would you like him to come here and help you campaign for senate?

RYAN: Well, anybody who wants to endorse me, you know, they're they're welcome to endorse and support ... But I'm gonna be the face of this campaign.

To turn the seat blue, he will have to overcome two years of Democratic battles amid narrow control of Congress.

"I think they can fight harder, especially with them having to control and empower both the House and the Senate, they should be able to at least push things a little quicker," Democratic primary voter Anthony Williams said.

"I would like to see the House and the Senate, be in control of the Republicans. Just for a check and balance," Republican primary voter Robert Smith said.

The stakes are high. If voters aren't able to draw a distinction between Ryan and the president's message, they may seek to hand the seat back to a Republican, which could have implications for Democrats nationally.

One thing Ryan says working in his favor is his Republican opponents.

"Whoever comes out of the Republican primary is going to be very, very extreme — and has said so publicly on their commercials over the past few months. So, I think we got a really, really good shot to win this thing," Ryan said.