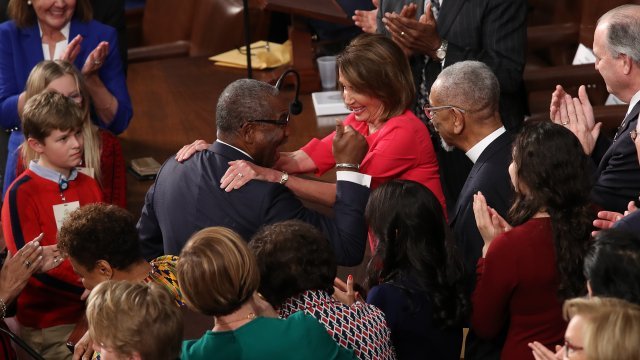 A new Congress is underway, and dozens of new Democrats are getting the lay of the land.

Freshman members of Congress Harley Rouda and Chrissy Houlahan soaked in their first day as part of the House majority.

"It's getting real, that's for sure. Especially when you come to the front door of the office and you see your name on the nameplate, that brings home that it's time," said Rouda.

"One generation ago, my father and his mother came here on a boat from war-torn Poland after having survived the Holocaust, and now I'm sitting here as a member of Congress," said Houlahan.

They're part of the most diverse Congress in history, not just in terms of gender but in terms of sexual orientation, religion and race. But there's little time for celebration with a government shutdown on their hands. House Democrats say they're focused on furthering a bill to end the shutdown with no money for the border wall.

Even with House passage, it's not expected to go anywhere. Senate Majority Leader Mitch McConnell stated before the vote that he wouldn't bring a passed bill to the floor.

But once they get the government open, they can focus on their own legislative priorities. For Houlahan, it's issues like transportation, infrastructure, education and veterans' affairs. For Rouda, it's climate change and infrastructure.

Both Rouda and Houlahan say no matter what committees they end up on, they'll focus on issues important to their constituents, and they both want to do it in a bipartisan fashion.