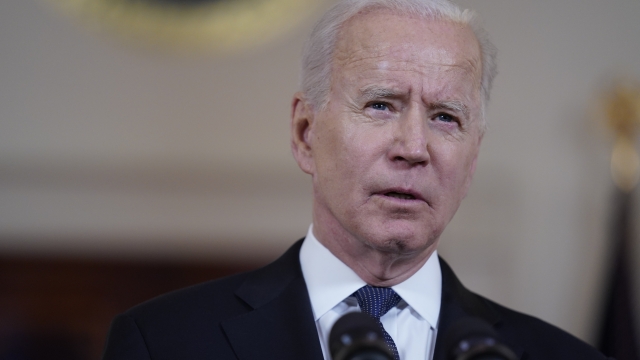 SMS
Democrats Push President Biden To Shift Stance On Israel
By Shira Tarlo
By Shira Tarlo
June 7, 2021
A growing number of Democrats in Congress are stepping up pressure on the Biden White House to take a tougher position on Israel.
SHOW TRANSCRIPT

President Biden faces mounting pressure from members of his own party to take a tougher stance on Israel after violence between the Israeli government and Palestinian military group Hamas claimed hundreds of lives and deepened the humanitarian crisis in Gaza.

Seventeen Democratic senators wrote to Secretary of State Antony Blinken urging him to address the "humanitarian emergency" in Gaza. The group is led by Sen. Chris Van Hollen of Maryland.

Progressive House Democrats, including Rashida Tlaib and Ilhan Omar, have been longtime critics of the Israeli government and added their voices to the chorus of criticisms.

"We must, with no hesitation, demand that our country recognize that the unconditional support of Israel has enabled the erasure of Palestinian life and the denial of the rights of millions of refugees," Tlaib, D-Mich., said last month on the House floor.

And more than 500 former Biden campaign and Democratic Party staffers signed an open letter calling on the president to "hold Israel accountable for its actions" in the Gaza Strip.

"This felt like a moment where we could no longer remain silent," said Matan Arad-Neeman, an Israeli-American who worked for the Biden campaign in Arizona as a field organizer.

Matan Arad-Neeman and his colleague, Heba Mohammad, helped organize the effort. Both worked on the Biden campaign in 2020.

"For all of the co-authors of this letter, this is a deeply personal issue," explained Mohammad, a Palestinian American who worked as the digital organizing director for the Democratic Party of Wisconsin. "I am Palestinian and Matan is Jewish-Israeli and for our families who are there, and also just the general sense of justice, we knew this is something that we needed to do."

The efforts come as a cease-fire reached last month between Israel and Hamas has so far managed to hold. They highlight a deepening split in the Democratic Party over Israel, even as the U.S.-Israel relationship may appear strong as ever. Throughout the conflict in Gaza, the Biden administration issued statements supporting Israel's "right to self-defense," opposed a U.N. Security Council resolution calling for a cease-fire and approved the sale of U.S. arms worth $735 million to Israel.

"Biden really did seem to want to continue a policy that was certainly robust in its defense of Israel's right to self-defense," said Brett Bruen, a former U.S. diplomat who was director of global engagement in the Obama White House. "But we did hear and we did see a lot of critics on the Democratic side saying we cannot just give them carte blanche."

Bruen served as White House director of global engagement under President Barack Obama from 2013 to 2015. He says with a new government expected to take shape in Israel, the Biden White House will be able to adopt a more neutral stance toward its longtime ally.

"You saw the Biden administration almost hold up as a point of pride that they hadn't given in to the pressure from their own party. Temporarily, that may be the case, but longer term, it's going to start to wear on them," explained Bruen. "They're not going to be able to take such a stridently pro-Israel position. They're going to have to accommodate some of those voices because they're going to need those votes. The margins that they've got in the House and certainly in the Senate are just too narrow."

Publicly, the White House maintains there hasn't been a shift in the U.S.'s position toward Israel.

"We have a long and abiding relationship — strategic relationship — with Israel, and that will continue to be the case no matter who is leading the country," White House press secretary Jen Psaki said during a recent briefing.