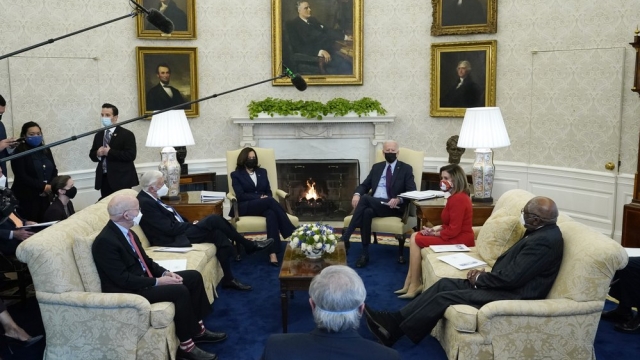 House Democrats are ready to move on President Biden’s COVID relief plan. A final bid could be passed by the full House within the upcoming week but it will face a thorny debate in the evenly split Senate.

So key players are drawing on the recent past to navigate what’s ahead. The COVID-19 pandemic is unlike anything the U.S. has seen in a century. But when it comes to responding to an economic crisis, Washington may look back to 2009.

Former President Barack Obama on February 3, 2009: "Now is the time for Washington to act."

When the Obama administration took office it was the height of the Great Recession. Today, Democrats again have control of Congress and the White House amid a dire economic situation.

House Speaker Nancy Pelosi said, "We hope to have this done by end of February."

Lara Brown, director of the George Washington University Graduate School of Political Management, says the consequences of the September 2008 financial crash were more acute in January 2009 than they are one year into the COVID pandemic.

"Even though we are in a similar situation to 2009, there are many things that are different — the first one being that the president has much more negotiation experience with Congress," Brown said.

President Biden, who spent more than three decades on Capitol Hill, sat down with a group of GOP Senators earlier this month but brushed off their $600 billion proposal.

More than 11 million Americans are set to lose unemployment benefits between mid March and mid April. That has Congress on the clock to pass President Biden’s $1.9 trillion dollar relief proposal.

Republicans say he’s backtracking on a campaign promise of bipartisanship.

Senate Minority Leader Mitch McConnell said, "The rushed budget process that will play out this week is exactly the wrong path toward making law."

But Democratic overtures to win GOP support for the $787 billion dollar American Recovery and Reinvestment Act of 2009 only saw a handful of Hill Republicans break ranks.

On the heels of a campaign that pointedly criticized his opponent’s pandemic management, the early stakes are high for President Biden as they were for Obama’s stimulus and the Affordable Care Act and Donald Trump’s tax cut passed in his first year in office.

"It makes sense that what President Biden is doing is first out of the gate, the most important piece of legislation that all Americans will appreciate, irrespective of where they sit on the partisan spectrum," said Brown.

The debate over financial support for Americans could set the tone for thornier topics on President Biden’s agenda, like the immigration bill announced by the White House on Thursday.