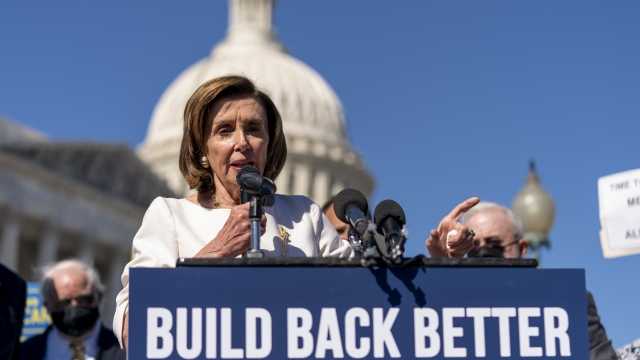 This week was marked by a public downsizing of President Biden's plans.

From the White House to the Capitol, Democrats are scrambling to pass President Biden's social spending plans by their self-imposed end-of-October target.

Democratic leaders said earlier this week they'd have a deal on a basic framework – what's in the bill and how it's paid for by Friday.

"The House has been on schedule," she said. "We have a goal. We have a timetable. We have milestones and we've met them all, and this is one of them."

This week was marked by a public downsizing of President Biden's plans, with key moderate Democrats working to get the price tag of the overall bill down from an earlier target of $3.5 trillion.

The total value now hovering in the $1.5 - $2 trillion range – leading congressional Democrats to cut a part of President Biden's plan to give most Americans a community college degree for free.

"Mr. Manchin and one other person has indicated they will not support free community college," President Biden said.

And this week, another stumble – as yet another key moderate Democrat, Kyrsten Sinema of Arizona, reportedly told the White House she would largely not support tax increases Democrats hoped would pay for their plans to avoid adding to the national debt.

That's something the president addressed in a CNN town hall Thursday: "She's supportive of all the, almost all the things I mentioned relating to everything from a family care to all, to all those issues," he said. "Where she's not supportive is, she says she will not raise a single penny in taxes on the corporate side and or on wealthy people, period."

On Capitol Hill, many lawmakers returned to their districts Thursday afternoon – leaving the president's agenda hanging in the balance.