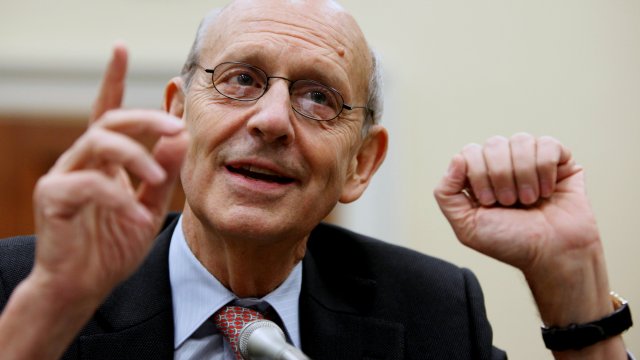 Democrats still reeling from two significant blows on the Supreme Court bench in recent years are trying to make sure they don't make it a third.

Justice Stephen Breyer, who will be 83 later this summer, is the oldest Supreme Court Justic by more than a decade. And as the Court reaches the end of its term, progressive groups and at least one Democrat in Congress are pressuring the longtime justice to retire.

"Justice Breyer, for whom I have great respect, should retire at the end of this term," Rep. Mondaire Jones told Cheddar News in April. "My goodness, have we not learned our lesson?"

In recent years, two justices have passed away while serving-- and left it up to Congress whether a nominee would get through.

Then-Senate Majority Leader Mitch McConnell kept President Obama from getting his nominee across the finish line, citing an upcoming election, but quickly confirmed President Trump's pick just weeks before Election Day 2020. Those decisions shifted the balance of the Court to 6-3 conservative. Now McConnell says, should Republicans win back the Senate in 2022, and should a seat become available, he'll prevent President Biden from seating his pick, too.

"I think it’s highly unlikely. In fact, no, I don’t think either party if it controlled, if it were different from the president, would confirm a Supreme Court nominee in the middle of an election," McConnell recently told radio host Hugh Hewitt.

Elliot Slotnick studies judicial politics at The Ohio State, and says the GOP has done a better job of gaming out the seats on the Court in recent years.

"Kennedy stepped down when he was still in good health," said Slotnick. "The Kennedy example is the most recent example of somebody I think, leaving the court when they you know, still had time in front of them to serve."

Kennedy's resignation in 2018 paved the way for his own clerk, 53-year-old  Judge Brett Kavanaugh, to get on the bench. Democrats, on the other hand, haven't had success in convincing liberal justices to step down. Justice Ruth Bader Ginsburg refused to retire during the Obama administration, despite her age and health struggles. She died in 2020, and her seat was filled by conservative Justice Amy Coney Barrett.

Progressives are also pushing for legislation to expand the Supreme Court as a way to offset Republican-led confirmations they say broke longstanding precedents.

"They are being quite clear that they will never, when they control the Senate, allow Democrats to fill vacancies on the Supreme Court," said Aaron Belkin, director of Take Back The Court. "And you just can't have a democracy when one party disregards norms like that."

Court watchers have been looking to see whether Breyer hires law clerks for the fall to decipher if he's planning a retirement and those hoping for a vacancy will be disappointed to know he's hired a full roster for next term.