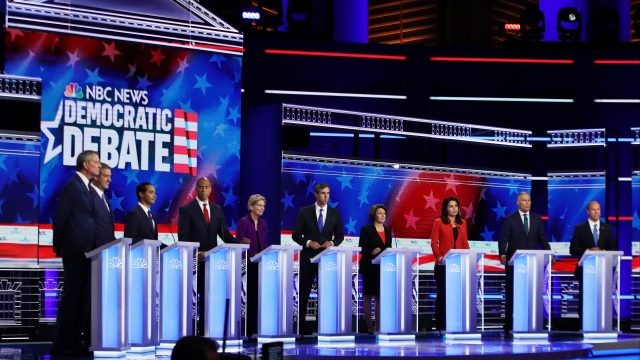 In what was more of a lightning round than an in-depth debate, 10 Democratic presidential candidates presented their vision for America in the first of two debates.

Candidates had just 60 seconds to answer questions, and 30 seconds for follow-up responses. That led to a lot of moments like this:

".. we need to have someone who's a champion for that."

"But we are out of time. We're up against a hard break but we will have much more. Mayor de Blasio we'll have more. The commercial is coming."

The moderators touched on a wide variety of issues, including the economy, foreign policy and gun control.

"Gun violence is a national health emergency in this country. ... We can do the things that are sensible. We can do the universal background checks. We can ban the weapons of war. But we can also double down on research and find out what really works," Warren said.

"Ninety percent of the shooters who do school shootings come from the school they're in. And 73% of them feel shamed, traumatized or bullied. We need to make sure that these kids feels connected to the school, that means a mental health counselor in every single school in the United States. We need to start playing offense," Ryan said.

On Iran, Sen. Cory Booker was the only candidate on stage that said he would not re-sign the Iran nuclear deal.

"We need to renegotiate and get back into a deal. But I'm not going to have a primary platform to say unilaterally I'm going to rejoin that deal. Because when I am president of the United States, I'm going to do the best I can to secure this country and that region, and make sure that if I have the opportunity to leverage a better deal, I'm going to do it," Booker said.

The night's discussion of immigration was started with questions about the graphic images of a father and daughter who drowned trying to get to the U.S. to claim asylum. That prompted some passionate responses.

“Watching that image of Oscar and his daughter Valeria is heartbreaking. It should also piss us all off,” Castro said.

"Every American should say that is not America. Those are not our values. But we have to get under the skin of why we have this crisis. ... The way that American citizens have been told that immigrants somehow created their misery, and their pain and their challenges. For all the American citizens out there feel you've fallen behind, who feel the American is not working for you — the immigrants didn't do that to you," de Blasio said.

On health care, all the candidates spoke about wanting to achieve universal coverage, but Warren and de Blasio were the only two who said they'd abolish the private health insurance system to get there.

With 10 candidates on stage, not everyone was able to answer a question on every issue. But the debate did give some candidates with lower poll numbers a moment to shine.

"I just want to say there's three women up here who have fought pretty hard for a woman's right to choose. So I'll start with that," Klobuchar siad.

"But all the big transformative things we've ever done in this country's history have happened when huge majorities of the American people get behind them. Which is why we need real solutions not impossible promises,” Delaney said.