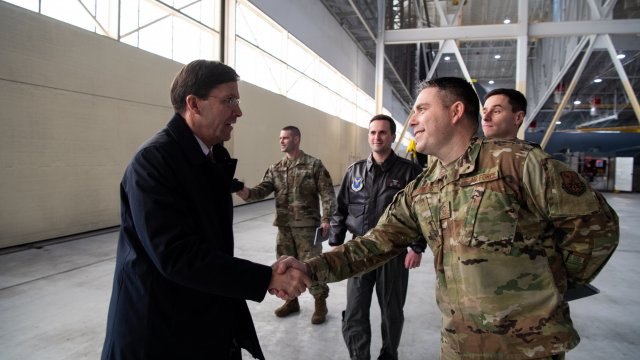 Defense Secretary Mark Esper is making his rounds at key U.S. air bases, in a push to emphasize the importance of nuclear deterrence and the need to modernize the U.S.'s nuclear arsenal.

Esper told reporters at Minot Air Force Base, "We need to have the confidence that our triad and related systems are effective ... safe ... reliable ... and credible."

The Trump administration has expressed concern about aging nuclear weapons infrastructure and has pushed for more funds to modernize weapons. But it comes at a price. The Congressional Budget Office studied an administration plan from 2019 and estimated the U.S. would spend $494 billion on nuclear forces alone between now and 2028.

President Trump says he wants a treaty to limit the nuclear arms race between the U.S., China and Russia. But China hasn't given indications it wants to participate in talks, so the president argues this leaves him little choice but to spend money to modernize U.S. weapons.

"Russia and China both want to negotiate with us to stop this craziness of spending billions and billions of dollars on nuclear weapons," President Trump said earlier this month. "But the only way — until we have that agreement — the only thing I can do is create, by far, the strongest nuclear force anywhere in the world, which, as you know, over the last three years, we very much upgraded our nuclear."

Additional reporting from Robert Burns of the Associated Press.