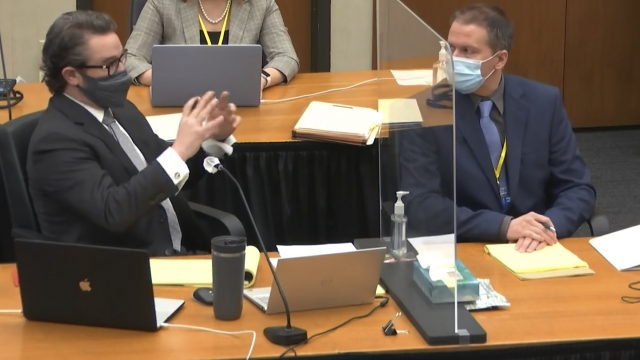 SMS
Court TV: Defense Begins Case In Chauvin Murder Trial
April 13, 2021
This could be the last week of testimony in the trial.
SHOW TRANSCRIPT

The defense case is underway in downtown Minneapolis. The defense started by calling six witnesses to raise reasonable doubt into the trial.

The first expert on the stand was Barry Brodd. He's a use of force expert who told the jury that what Chauvin did was following Minneapolis Police Department policy.

Barry Brodd: "I felt that Derek Chauvin was justified was acting with objective reasonableness following Minneapolis Police Department policy and current standards of law enforcement and his interactions with Mr. Floyd."

The jury also heard from a passenger inside the SUV with George Floyd the night of Memorial Day 2020.

Shawanda Hill took the stand to offer for the defense testimony that George Floyd was falling asleep in the car before police arrived.

Also the defense called witnesses around a prior arrest of George Floyd in May 2019. They wanted to show similarities between that arrest and what happened on Memorial Day 2020.

We're expecting the defense case to continue through tomorrow. But this could be the last week of testimony in the trial.

And the lingering question is whether or not Derek Chauvin himself will take the stand and testify in his own defense.