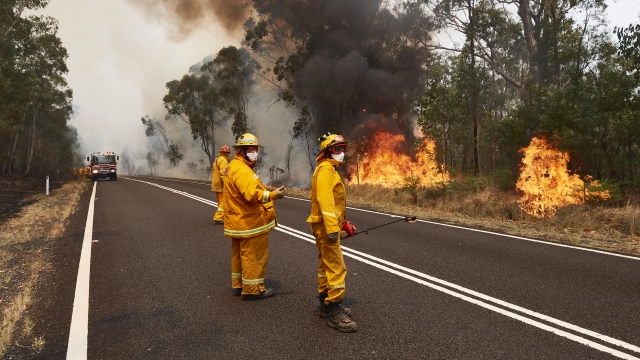 Thousands of firefighters have been deployed to combat more than 100 fires burning along Australia's east coast.

Authorities in Australia have confirmed the death of a fourth person in relation to the  "catastrophic" bush fires raging along the country's east coast.

Over the past week, thousands of firefighters have been deployed to combat more than 100 fires in New South Wales and Queensland.

As of Thursday afternoon local time, the Insurance Council of Australia said insurers had received 730 claims with losses estimated at more than $54 million and expect many more to be filed in the days to come.

Hundreds of homes have been lost and thousands of residents have been forced to evacuate. Animals in the region are also in danger. Hundreds of koalas are feared to have been killed by the bush fires.

Australia’s ongoing drought is partly to blame. This is one of the worst droughts the country has experienced in decades. And strong winds have only made matters worse.

Australian Greens party members have blamed climate change for the fires and are calling on the government to declare a climate emergency. Prime Minister Scott Morrison said his government has balanced Australia's economic needs with "taking real action on climate change."

Speaking with reporters in Sydney this week, New South Wales Rural Fire Service Commissioner Shane Fitzsimmons said, "We will not have all these fires contained and locked up for many, many weeks." He added, "Unfortunately, what we need is rain."