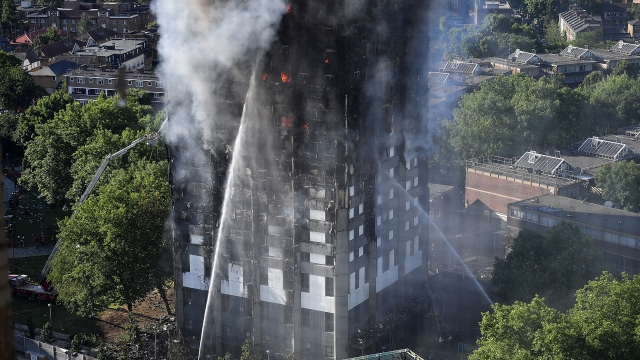 SMS
Death Toll Climbs In London Grenfell Tower Apartment Fire
By Katherine Biek
By Katherine Biek
June 19, 2017
Police released the latest death toll as a moment of silence was held across the U.K. for the victims and their families.
SHOW TRANSCRIPT

On Monday, police confirmed at least 79 people are dead or presumed dead after a fire ravaged a 24-story apartment building in west London last week.

That number may change as investigators continue to search the remains of Grenfell Tower. To give the public an idea of the challenge of investigating the June 14 fire, police released video of the inside of one of the apartments over the weekend showing the devastation.

Police opened a criminal investigation. Aside from the cause of the fire, officials will look into the building's safety measures and how it was maintained.

That includes looking into material used to insulate the building. It was reportedly flammable, and it might have been banned on buildings above a specific height.

Prime Minister Theresa May announced an emergency fund for those affected by the fire. Funding is also being provided for temporary housing, legal representation and mental health support.

There was a moment of silence across the U.K. Monday for the victims and their families.

Over the weekend, Queen Elizabeth paid homage to the victims at the annual Trooping the Colour ceremony.