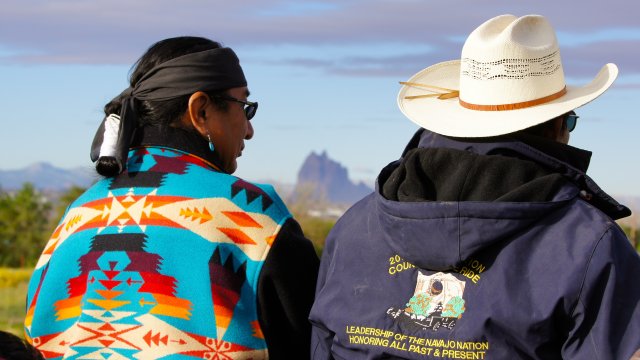 Lezmond Mitchell is the only Native American on death row and may become the first Native to be executed for killing another Native on sovereign land.

When Attorney General William Barr reinstated federal executions in July, it ended a 16-year halt on capital punishment and forced the U.S. government to deal with several unanswered questions — one of which highlights America's long contentious relationship with Native American tribal sovereignty.

Lezmond Mitchell is the only Native American on death row and could become the first Native person in modern American history to be executed by the U.S. government for killing another Native person on sovereign land.

Mitchell, a member of the Navajo Nation, was convicted and sentenced to death for the 2001 murders of Alyce Slim and her nine-year-old granddaughter. Despite the conviction, the Navajo Nation, the federal prosecutor assigned to the case and multiple members of the Slim family recommended that Mitchell not be executed.

The Navajo Nation's statement read: "By subjecting Mr. Mitchell to capital punishment, the Department of Justice has violated our laws and our belief system, … we view this action as both a moral and political affront to Navajo sovereignty."

While the U.S. government has the power to prosecute certain major crimes, like murder, on sovereign lands, tribes can choose whether the crimes are elible for the death penalty. The Navajo Nation, along with the vast majority of American tribes, has opted out of federal executions.

But John Ashcroft, the attorney general at the time, used a legal loophole to pursue the death penalty anyway. He sought execution because the murders took place during a carjacking, which falls under federal authority and does not feature an opt-in or out provision for Native people.

The Navajo Nation believes 'traditional peacemaking' should be a legitimate part of the criminal justice system and said "the negative force that drives a person to commit evil acts can only be extracted by the Creator."

Mitchell's attorney, Jon Aminoff, told Newsy the federal government has largely respected the tribal nations' wishes on capital punishment until now. "There have been at least 20 other instances of murder on tribal land in which the DOJ has considered a capital prosecution, but ultimately declined to do so …  This decision violated the spirit, if not the letter, of the Federal Death Penalty Act."

On Friday, Aminoff argued Mitchell's appeal in front of the Ninth Circuit. He claims there was racial bias in the jury that needs investigation because it did not appropriately represent Mitchell's Native peers, since there was only one Navajo on the jury.

As it stands, Mitchell's appeal is the only thing standing between him and execution. Attorney General Barr scheduled five federal executions for the end of 2019 and early 2020. Four of the inmates set to be executed are wrapped up in a lawsuit against Attorney General Barr. Mitchell is not a part of that lawsuit, which means he's not protected by its injunction.

According to the Death Penalty Information Center, 2019 marks the first time in 25 years that a majority of Americans believe life in prison without parole is a better punishment for murder than the death penalty.