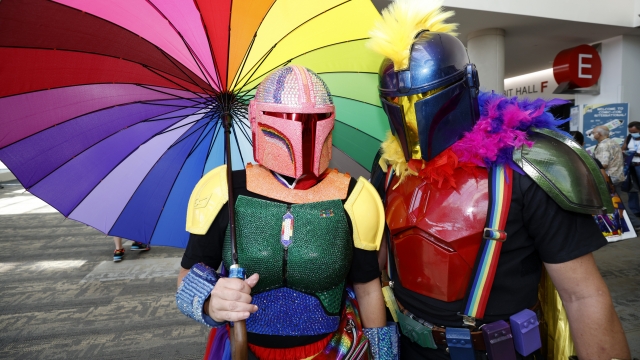 It is day three of San Diego Comic-Con, where more than 130,000 fans are gathered to celebrate all things sci-fi, superheroes, fantasies, and franchises.

Yesterday, Amazon introduced fans to the cast of "The Rings of Power" — based on the "Lord of the Rings."

Newsy got to catch up with some of the actors.

"The beautiful thing about our show is that it's a healthy balance of old and new," said Nazanin Boniadi, who plays Bronwyn in "The Rings of Power."

"Because of the nature of our show, they're all so intricate and tied to Tolkien that every time you watch it, you're going to go 'oh my god, I didn't even see that!'" said

Benjamin Walker, who plays High King Gil-galad in "The Rings of Power."

Today is the buzziest day, and we're outside Hall H, where DC Comics introduced new trailers for "Shazam: Fury of the Gods" and "Black Adam" starring Dwayne the Rock Johnson.

If you think that's a lot of big, just wait. Marvel is headlining the main stage at the end of the day with some highly anticipated announcements, trailers, and cast appearances for their next projects.