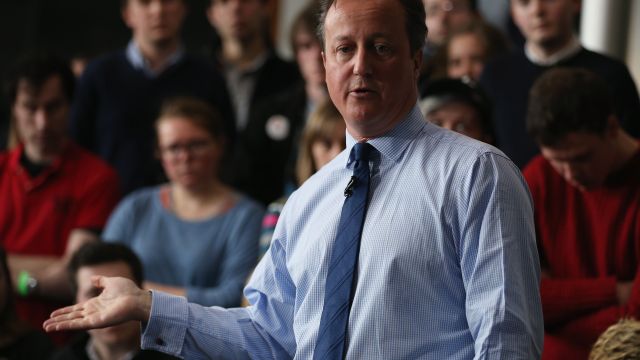 SMS
David Cameron Admits Ties To Panama Papers Scandal
By Matt Picht
By Matt Picht
April 7, 2016
The prime minister owned shares in a trust tied to the law firm at the center of the Panama Papers leak. But he insists he paid tax on that money.
SHOW TRANSCRIPT

Tackling tax-avoidance schemes has been a major theme of U.K. Prime Minister David Cameron's administration. So the televised admission that Cameron might have profited from one such scheme set up by his father was awkward, to say the least.

"I want to be as clear as I can about the past, about the present, about the future because frankly I don't have anything to hide. I am proud of my dad and what he did, the business he established and all the rest of it," Cameron said.

The PM's late father, Ian Cameron, was a client of Mossack Fonseca, the law firm at the center of the massive Panama Papers document leak. According to documents leaked, the elder Cameron was a board member of Blairmore Holdings, an offshore trust designed to hide money from the U.K. tax authorities.

David Cameron admitted on ITV he had shares in the company, which he sold in 2010 for a profit of about $27,000 shortly before becoming prime minister. Cameron says he paid income tax on the dividends, but was less certain whether tax avoidance was linked to the approximately $420,000 he inherited from his father.

Right now, it doesn't look like the revelations will topple Cameron, but it is somewhat embarrassing given the prime minister's focus on cracking down on tax avoidance. One of the offshore tactics Blairmore used — bearer shares — was outlawed by Cameron's government in 2015.

The prime minster did deny that Blairmore was set up for tax avoidance purposes; he insists it was a way to get around government exchange controls instead. The BBC reports Cameron plans to publish his full tax returns sometime next week.

This video includes images from Channel 4, the Conservative Party and the European Council.