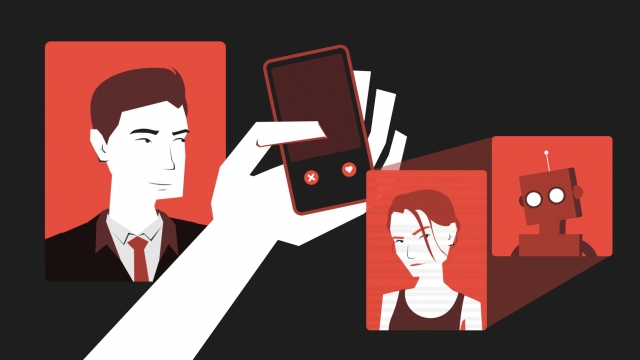 SMS
Sex And Spying: An Old Trick Made New With Technology
By Sasha Ingber
By Sasha Ingber
February 10, 2021
A military officer tells Newsy he used a dating app to search for Capitol rioters and sent information to the FBI.
SHOW TRANSCRIPT

"We saw it as our patriotic duty to start swiping — for our country, of course," he said.

This military officer didn’t want to share his identity because of his job. But after the Capitol insurrection he changed his settings on a dating app to find women who stormed the building. Some information was sent to the FBI, but he wouldn’t exactly call himself a Casanova.

Ah, honeypots and honeytraps. A melding of two of the world’s oldest professions, sex and spying. And gone are the days of tiny pistols in lipsticks and cameras tucked in ties.

"Stasi bra cam. Don't you wish you were wearing this when you recorded an interview with someone?" asked Amanda Ohlke, director of adult education at the International Spy Museum in Washington, D.C.

"Sex and espionage. Why do the two often go hand in?" Ingber asked.

"Well, in the words of KGB Major General retired Oleg Kalugin, as long as there are men and women, sex will be involved in the spy wars," said Ohlke.

Just a few years ago, the CIA put a book about sexpionage on its recommended reading list.

"Well, of course, we're given a counterintelligence course when we first join into the agency," said former CIA intelligence officer and author Alex Finley. "And on day one, the first thing they tell you is, ‘You're not that good looking.’"

That makes dating as an intelligence officer a little more complicated.

"I think a lot of people do have trouble with that," said Finley. "So they start dating somebody, but they're very wary to get too close to them because there is this fear. But what if this, what if this is something that is something it doesn't present itself to be, what if there's actually something nefarious behind it?"

Still, men and women of all ages and sexual orientations continue to fall for the oldest trick in the book.

"It's been happening for decade upon decade, year upon year, but how has honey potting evolved?" Ingber asked Ohlke.

"Maybe you could get them to fall in love with you and share secrets," said Ohlke. "Or maybe you can just spend one night with them, grab their laptop, grab their iPhone, maybe even just clean out the contents of their laptop with a jump drive."

Today technology opens new doors. Not only is it common to connect with strangers — especially with people lonely in the pandemic — a senior government official familiar with Artificial Intelligence technology tells Newsy it would be easy for foreign governments to pair deepfake profiles with AI, creating more alluring prospects for targets.

"The Russians and the Chinese have no problem blackmailing you," said Finley. "If, in fact, you feel too uncomfortable to come forward and say that you were targeted, that's probably why you were targeted in the first place."

As for our military officer trying to hook January 6 insurrectionists online, he’s done fishing. But with Valentine’s Day fast approaching, you never know…

He told Newsy, "If you do find a match here, when you're here for an insurrection, I mean, that's a great 'How I Met Your Mother' story, I'll tell you that right now."