Dan Coats To Step Down As Director Of National Intelligence 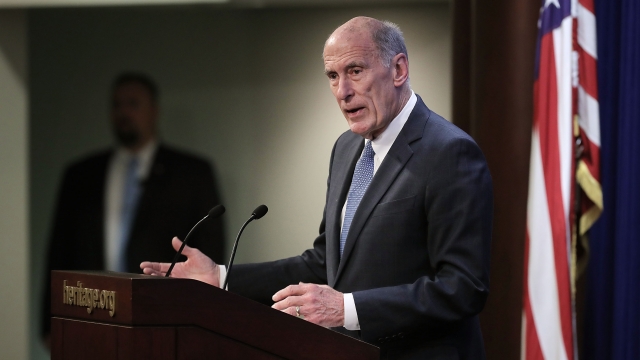 SMS
Dan Coats To Step Down As Director Of National Intelligence
By Katherine Biek
By Katherine Biek
July 29, 2019
During his years in the position, Coats and President Trump often disagreed on policy regarding North Korea, Iran and Russian interference.
SHOW TRANSCRIPT

Dan Coats is stepping down from his post as the director of national intelligence.

In his resignation letter, Coats said that the intelligence community is "stronger than ever" and that he believes it's time to "move on to the next chapter" of his life.

President Trump nominated the former senator from Indiana to lead the U.S. intelligence community in 2017. But during his more than two years in the position, Coats and the president often disagreed on policy regarding North Korea's nuclear capabilities, Iran's nuclear weapons program and Russian interference in U.S. elections.

While speaking at a national security conference in July 2018, Coats appeared to be taken by surprise by the White House's announcement that Russian President Vladimir Putin had been invited to Washington.

President Trump tweeted on Sunday that Coats' last day on the job will be August 15. The president also said he plans to nominate U.S. Rep. John Ratcliffe to replace Coats.

"Donald Trump is not above the law. He's not, but he damn sure shouldn't be below the law which is where Volume 2 of this report puts him," Ratcliffe told Mueller.

The Senate will need to confirm Ratcliffe's nomination once he's formally nominated.