Daddy Longlegs Once Had 4 Eyes 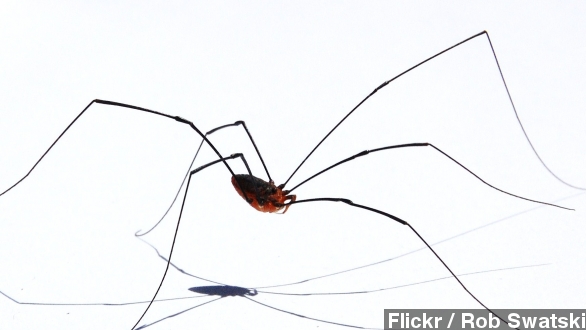 SMS
Daddy Longlegs Once Had 4 Eyes
By Amy Kluber
By Amy Kluber
April 11, 2014
A new fossil has revealed daddy longlegs one had an extra pair of eyes. Modern species retain the gene for the extra pair but never develop them.
SHOW TRANSCRIPT

As if they couldn't get any creepier, the arachnids we all know today as daddy longlegs once had not just one pair of eyes but two.

Researchers say a 305-million-year-old harvestman fossil discovered in France says a lot about the evolutionary history of the critters, which presently only have one set of clustered eyes on top of their heads. (Via National Geographic)

But high-resolution X-ray images of the fossil reveal ancestors of the spider-like daddy longlegs had another set of eyes closer to the sides of their heads, called lateral eyes. (Via LiveScience)

The researchers then looked at modern harvestmen embryos and found they still retain the gene for the lost set of eyes — though they only form one set when they hatch. (Via American Museum of Natural History)

So why did modern daddy longlegs lose those extra eyes? According to Wired, one of the study's authors speculates the species might have adapted to darker areas and no longer needed them.

The researchers say the bodies of these species have changed very little as they've evolved, but the discovery is a rare, detailed look into the differences between ancient and modern arachnids.

As the study's lead researcher notes, "Terrestrial arthropods like harvestmen have a sparse fossil record because their exoskeletons don't preserve well." (Via American Museum of Natural History)

As the International Business Times reports, they're more closely related to scorpions, which also have exoskeletons. And unlike spiders, daddy longlegs' bodies look like single, oval-shaped structures.

And of course, real spiders have even more eyes than their look-alikes — usually about six or more. (Via Slate)