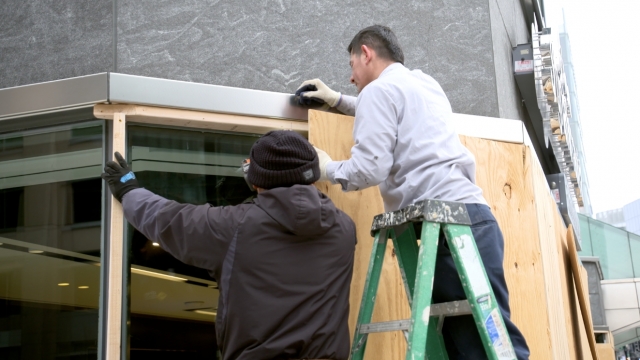 Thousands of protesters are expected to converge on Washington, D.C., this week for rallies that city officials warn could turn violent.

"We are urging D.C. residents, people from the region, to avoid the area. And especially avoid people who are coming here to look for confrontations, particularly physical confrontations," said D.C. Mayor Muriel Bowser

Most of those protesters are expected to be supporters of President Donald Trump, who tweeted he plans to attend a march outside the White House. The planned demonstrations surround Wednesday's joint session of Congress where the Electoral College votes will be formally counted and approved, solidifying President-elect Joe Biden's win.

Many businesses in downtown D.C, like the building you see here, have been boarded up in preparation for social unrest. There are also police stationed at certain intersections throughout downtown trying to prevent cars from getting into certain parts of downtown. And signs have also been posted prohibiting guns near the protest sites.

Federal and local officials are coordinating safety plans to prevent unrest like what took place in the city throughout 2020. Last month, at least four people were stabbed and one person was shot as protesters clashed during a pro-Trump rally.

Police officials say National Guard troops will assist with crowd management and traffic control and that they will not be armed. Mayor Bowser also didn't rule out putting a curfew in place if things get out of hand.