'Cyborg' Santos Suffers One Of The Most Gruesome MMA Injuries Ever 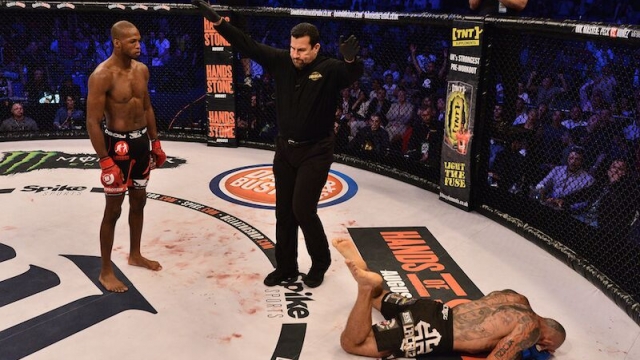 SMS
'Cyborg' Santos Suffers One Of The Most Gruesome MMA Injuries Ever
By Matt Moreno
By Matt Moreno
July 18, 2016
Evangelista "Cyborg" Santos reportedly suffered a fractured skull after Michael "Venom" Page KO'd him with a flying knee at Bellator 158.
SHOW TRANSCRIPT

But what many viewers might not have noticed is that Santos suffered a pretty serious injury — one of the most gruesome MMA injuries you'll probably ever see. Warning: The following images could be disturbing.

See, Page KO'd Santos with a flying knee that hit so hard it left a dent in Santos' head. An Instagram photo posted Sunday showed Santos suffered a fractured skull from the hit.

Santos' ex-wife, MMA fighter Cris "Cyborg," started a GoFundMe page to help Santos and his family since it became apparent the veteran fighter would be out of action for some time.

Page posted to Twitter on Sunday, "I would like to express my best wishes to @CYBORG121 & his family."

He followed that with a post Monday morning saying Santos had recently been released from the hospital and would be able to fly home shortly.

Santos is a nearly 20-year veteran of MMA fights. His loss to Page dropped him to 21-18 in his pro MMA career. There's no word yet on when, or if, Santos could return to the octagon.

This video includes a clip from Sherdog and images from Getty Images. Music provided courtesy of APM Music.