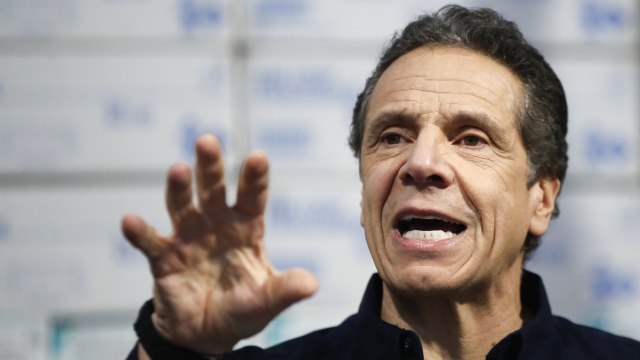 SMS
NY Gov. Cuomo Says State's Coronavirus Curve May Be Flattening
By Bailey Vogt
By Bailey Vogt
April 6, 2020
The governor pointed to coronavirus deaths remaining about the same for two days in a row and ICU admittance and hospitalizations both falling.
SHOW TRANSCRIPT

New York Gov. Andrew Cuomo said Monday the coronavirus may be reaching its peak in the hardest hit state.

The governor suggested a "possible flattening of the curve"  — pointing to how around 600 people died in 24 hours, about the same as the previous 24-hour period.

Additionally, the number of ICU admittance and hospitalizations have both fallen.

Cuomo extended his school and non-essential business closures until April 29th, adding another nine days of social distancing to help flatten the curve further. He said it's unknown whether the state's case rate has topped out or if those numbers will begin to fall.

Despite this, Cuomo said New York's health care system is running "beyond capacity" for ventilators and thanked states which have donated their breathing machines.

One of those states, California, announced Monday it would loan 500 ventilators to the national stockpile — allowing New York to receive more machines after Cuomo warned it could run out sometime this week.