Cubs To Move Forward With Renovations Amid Legal Threats 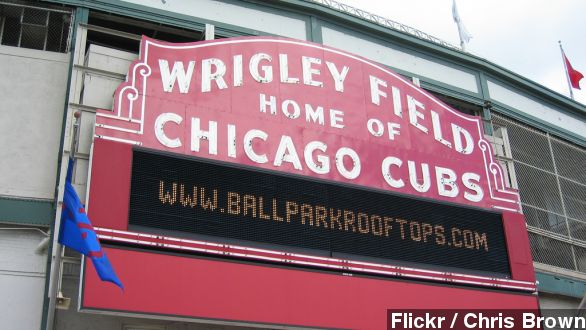 SMS
Cubs To Move Forward With Renovations Amid Legal Threats

Could more billboards and advertisements be erected high above those ivy walls in Wrigley Field? (Via Flickr / Kathy)

"We are proposing a master plan to the city of Chicago to expand Wrigley Field and to have several signs in the ballpark. ... We cannot delay any longer. The time to build a winner is now." (Via MLB)

That was part of a six-minute-long video posted on the Chicago Cubs official website where Cubs owner Tom Ricketts insists further improvements of the 100-year-old complex will be good for Chicago's economy and help the "loveable losers" stay competitive — who, lest we forget, haven't won a championship since 1908.  (Flickr / Phineas Jones, John W. Iwanski, Jake)

But, Ricket's appeal was met with heavy backlash from rooftop owners across the street from the historic ballpark who vow to take him to court if the plans move forward.

A rooftop owners' spokesman said Rickett's plan violates their contract. "It appears their zeal to block rooftop owners who pay them millions of dollars a year in royalties knows no bounds. ... Unfortunately, this decision by the Ricketts family will now result in this matter being resolved in a court of law." (Via WBBM)

But in the video Ricketts' said talks with those businesses failed to make any real progress. ''We've spent endless hours in negotiations with rooftop businesses. ... We've gotten nowhere in our talks with them to settle this dispute. It has to end.'' (Via CBS)

The battle between Ricketts and the rooftop owners has been an ongoing dispute over the years. And, it's easy to see why.

There's a lot of money at stake when you can watch baseball for free from a rooftop balcony. (Via Flickr / Wally Gobetz)

And, ESPN reports those owners have spent millions of dollars on their units and have a contract with the Cubs running through the next decade requiring them to fork over 17 percent of what they bring in.

"They want what they purchased. Which was they purchased apartment buildings and built up the rooftops, so they could see into Wrigley Field."

Including permission to build a massive Jumbotron in left field and a number of other video boards and LED signs across the outfield, a move no doubt eliciting a cringe from baseball purists, but padding the wallet of the front office. (Via Flickr / Wally Gobetz)

But, what makes this a sticky situation and ultimately bound for the courtroom is rooftop owners aren't the only ones facing loses. Ricketts' claims lack of stadium upgrades "puts us in the hole by tens of millions of dollars a year." (Via The Washington Post)

The Cubs will present their revised restoration plan to the city's Landmarks Commission on June 5.