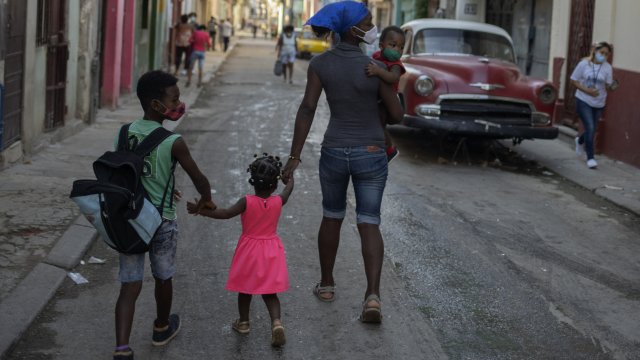 Large units of Cuban police have swept into Havana, and have reportedly made more than 100 arrests.

The streets, now much quieter, after a roar of ‘homeland and life’ chants broke decades of frustrated silence over communist rule, shortages of basic resources and most recently the island’s handling of COVID-19.

Anti-government protesters broadcasted the movement on the internet, a resource that has now gone dark.

People in Havana speculating-- the government is behind it.  A 17-year-old college student saying he thinks the government took the country offline so people can’t see what’s happening.

Still, the movement’s message is out and reverberating around the world.

From Mexico to Spain, through Miami—home to many Cuban Americans and exiled Cuban opposition leaders, Puerto Rico, even to our nation’s capital.

Where Florida senator Marco Rubio— a Cuban American— explained on the Senate floor Monday the history of suppression by the Cuban government.

"They ask for security in exchange for freedom. That is always the price that socialism asks for security."

And listed what he wants the U.S. to do:

"I hope we will all be clear about whose side we’re on. You don’t have to agree with anything I just said, but we should agree on is that people everywhere around the world should be allowed to go into the street peacefully march, call for an end to dictatorship and not have their head cracked open."

Rubio had five specific requests: for the U.S. to condemn not just tyranny but Marxist... socialist rule.

He called on the international community to speak out against repression.

He said no U.S. Sanctions on Cuba should be lifted.

He wants to ensure Cubans have internet access,  and make it clear the U.S. will not tolerate a mass migration from Cuba.

President Biden has said he stands with the Cuban people.

His administration is currently reviewing its policy on Cuba.