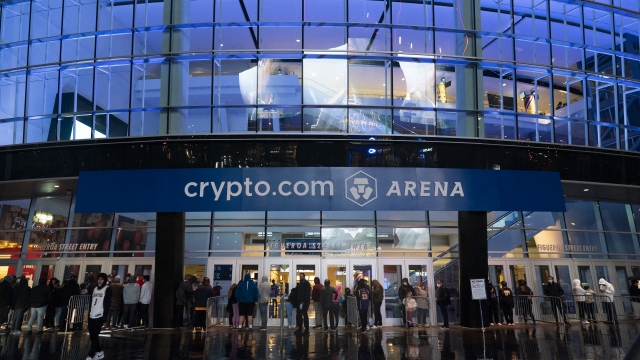 SMS
Cryptocurrency Is Taking Its First Steps Into The Super Bowl Ad Arena
By Tyler Adkisson
By Tyler Adkisson
February 10, 2022
Three crypto exchanges are buying ads for the first time as this year's 30 second slots run for $7 million.

This Super Bowl, cryptocurrency exchanges like Coinbase, FTX and Crypto.com are shelling out top dollar to run their first high-profile TV ads to an audience of upwards to 110 million viewers.

For these exchanges –  platforms where users can buy and sell crypto - the ads could serve as a high-risk, high reward way to generate awareness and engagement.

But the ads do not come cheap: ad rates for this Super Bowl go for as much as $7 million for 30 seconds of airtime.

"With the crypto platforms, what they need is more participants," David Sacco from the University of New Haven said. "Basically, everybody who signs up and uses their platform is going to be generating revenue for these companies, so it's really about trying to broaden that reach."

"You're talking about companies that are relatively unknown when you compare them to the Pepsis and Bank of Americas of the world, so scale is obviously a big one," Peter Laatz with IEG said. "Sports is able to deliver a significant amount of scale in a very short amount of time through a relevant lens."

The price tag is a lot, but these three crypto exchanges have spent even more exorbitant sums of cash to get into the sports world. Last year Crypto.com spent $700 million on the naming rights for the former Staples Center where the Los Angeles Lakers play. It also has a $30 million sponsorship deal with Paris Saint-Germain, a $10 million deal with the Philadelphia 76ers and deals worth more than $100 million with Formula 1 and UFC.

FTX spent $135 million to get their name on the Miami Heat's arena and reached a deal with the MLB to put an FTX patch on every umpire uniform. It also paid Tom Brady $20 million to star in an ad campaign. Coinbase inked a deal with the NBA to feature their logo during nationally televised games.

"Cypto right now, as a category, is outspending airlines, it's outspending quick-serve restaurants and it's outspending hotels," Laatz said. "They're pretty close to being a top 10 spender in all of North America and probably globally, literally within the last six to eight months. For an airline to build a portfolio of sponsorship that ranks in the top 15 spends, usually takes years."

The biggest question that remains is if these high-risk investments will pay off in the long run. Crypto's move into the Super Bowl mirrors that of the Dot-Com boom of Super Bowl 2000,when about a dozen web startups paid for ads, with many failing shortly thereafter.

Whether or not it's a bubble, it seems to have the markings of that. But if everything is a bubble in business, it's just a question of how big the bubble is and when or if it pops.