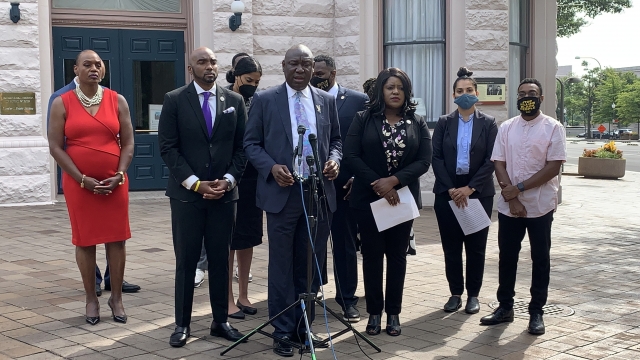 Five years after the shooting death of Terence Crutcher by a White police officer, family members have gathered in Washington to ask the Department of Justice to reopen its investigation into the incident.

"Terence was just a beautiful person inside and out," Tiffany Crutcher said. "I called him a huge teddy bear and he loved gospel music."

Tiffany says she and her family are still trying to cope with the loss of her twin brother.

"Just today, Terence's daughter went to get her driver's license. Terence will not be here for that milestone and she's sad about that," she said. "We have had no closure whatsoever."

Forty-year-old Crutcher was shot by officer Betty Jo Shelby in Tulsa, Oklahoma in 2016. Crutcher was unarmed and standing near his stalled vehicle when he was killed. Shelby said Crutcher did not listen to her orders and reached for something in his car. Tulsa police later said they did not find a gun in the SUV.

"Why are we making this announcement 5 years later? Because we do not trust the investigation from the previous administration," attorney Damario Simmons said. "We believe strongly that the evidence is clear, the video is clear. Terence Crutcher's civil rights were violated when he was shot with his hands up in the air and when they allowed him to lay on the ground for over two-and-a-half minutes without any medical assistance. That is on video and to this very day, not one officer has been disciplined."

Officer Shelby was tried in court but a jury found her not guilty of first-degree manslaughter. She now works in a different county.

"Nothing Dr. Crutcher or George Floyd's family or Breonna Taylor's family – not one family has ever said or did anything to suggest that they were against police. What they said is police excessive use of force," attorney Ben Crump said. "What this is about, is making sure that the American promise of liberty and due process of the law for every family is afforded."

Tiffany spoke with influential Senate Democrat Joe Manchin regarding her brother's case and The George Floyd Justice in Policing Act.