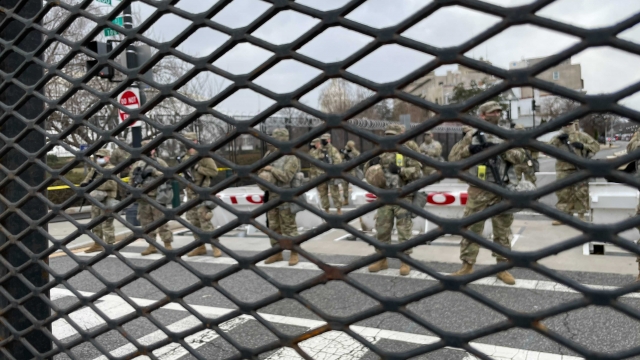 The National Guard, 25,000 strong, formed an armed chain for blocks around the Capitol, an unfriendly site at this strange inauguration.

“This one feels too subdued for me,” said longtime Washington resident Jill Cashen.

The clampdown two weeks after the raid on Congress, combined with the pandemic, kept the welcome mat rolled up.

This year, flags blanketed the National Mall, closed to the public.

The D.C. mayor told visitors to stay away, and they did.

“Being as though this is one is going to be virtual, we might not make as much as we do on a regular one,” Tom Johnson said.

And those who ventured to the Capitol largely lived nearby in a city that voted overwhelmingly for the new president.

“We did not expect to feel this much dread this week,” D.C. resident Sima Dajani said. “We are happy that today is Inauguration Day and that we have a new president, but it's still a little gloomy.”

Black Lives Matter Plaza, an epicenter of protest last summer, was one of the few spots the public could get close to the White House, though still blocks away.

Unlike two weeks ago, supporters of now former President Trump stayed out of sight.

Peace and calm held on a day many feared it might not.