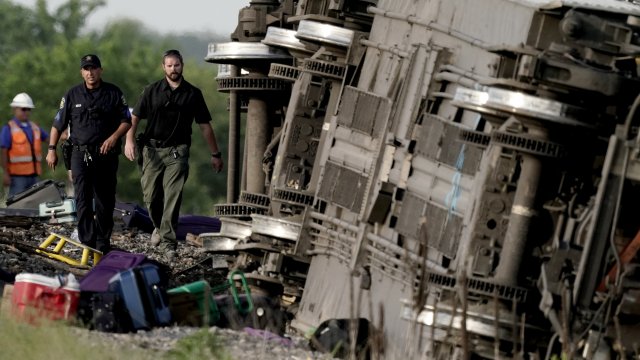 After a deadly Amtrak derailment in Missouri Monday, the National Transportation Safety Board is now investigating what went wrong.

The train went off the tracks at an intersection near Mendon, Missouri after crashing into a dump truck. It’s what’s known as a passive crossing, meaning there’s no flashing light or automatic gate.

Across the U.S., the Federal Railroad Administration says out of more than 140,000 public crossings, about 50% are passive.

Public records reviewed by Newsy don’t show any record of past accidents at this intersection, but a local farmer says he’s predicted something like this would happen for some time.

"We have had several close calls here ourselves," farmer Mike Spencer said. "We've got many stories we can tell about crossing this crossing."

Spencer even posted on Facebook about two weeks ago warning about the intersection and the approach.

A federal document for the specific crossing, filled out in September of 2020, says trains reach speeds of up to 90 miles per hour and that there are warning signs at the track but no pavement markings, stop signs or advance warning signs.

Operation Lifesaver, the largest rail safety organization in the U.S., is pushing to increase awareness at all intersections, but especially ones without lights or gates.

"It's just like any intersection on a road," said Gary Koerner, state coordinator of Wisconsin Operation Lifesaver. "You see a yield sign, you're supposed to slow down, you're supposed to prepare to stop. So yeah, so as you can see the cars flying through here they're not preparing to stop, so if a train was coming, it would be a kind of a surprise to them."

One expert told Newsy this happened at a public intersection, which means the Amtrak train was required to blow the horn a quarter of a mile out.

Amtrak said in an email that NTSB investigators are on the scene of the crash, which injured 150 people and killed 4 people.