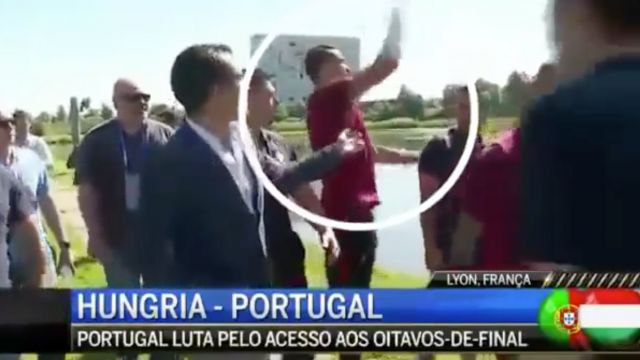 Portugal's Cristiano Ronaldo might be one of the greatest goal scorers in soccer, but his public relations skills could use a bit of work.

A reporter from Portugal's CMTV, a 24-hour news channel, recently tried to ask the international soccer star a question while he was out for a stroll. It did not go well.

The reporter asked, "Ronaldo, are you prepared for this game today?"

The game the reporter was talking about is Portugal's match against Hungary in Euro 2016 on Wednesday night. If Portugal loses, they could be bounced from the tournament — a major disappointment for FIFA's eighth-ranked team in the world.

Ronaldo has a tendency to tell reporters exactly what he thinks about their questions, regardless of how it comes off.

"No? You can't? There aren't any. Bye, everyone. Thank you," Ronaldo said in response to a reporter's question about why he was struggling scoring goals.

But he's had a long-running beef with CMTV — the TV side of a popular tabloid newspaper.

He refused to answer a CMTV reporter's question at a press conference in 2014.

"For who?" Ronaldo asked.

"About the game against Denmark?" the reporter asked.

"It's not worth it," Ronaldo replied.

He's even gone to court over a privacy matter after the news outlet ran a story about the mother of his child.

But this? Well, it's probably something only Ronaldo can get away with. RIP, microphone.

This video includes clips from UEFA and Nike, and images from Getty Images. Music provided courtesy of APM Music.