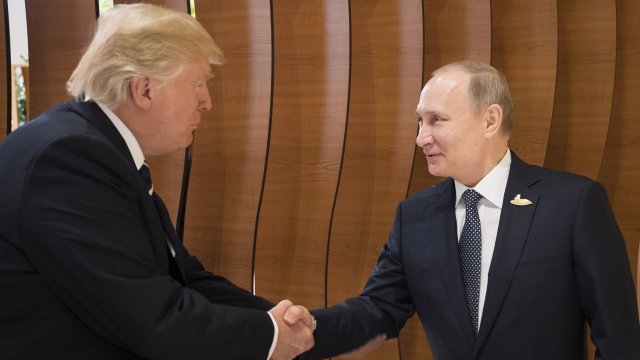 President Donald Trump and Russian President Vladimir Putin are set to meet Monday in Helsinki, and depending on how things go, it could have major ramifications for other countries, too.

One of the biggest issues on some people's minds is the question of Russia's annexation of Crimea in 2014. Since then, it's been the U.S. position that Crimea belongs to Ukraine. But Trump's statements on the issue could give Russia reason to hope he might change that stance.

The president has been evasive on the issue. In June, Trump told reporters, "We're going to have to see," leaving the door open for the U.S. to recognize Russia's claim on the region. And that same month at the G7 summit, he reportedly suggested Crimea is Russian because people there speak Russian.

The Kremlin considers the issue of Crimea settled — it's theirs by right of referendum, they claim — and says the issue isn't on the table. Even so, the Brookings Institute notes that Russia would love for a U.S. president to recognize the annexation. But Brookings reports doing so could violate a 1994 memorandum between the U.S., Ukraine, Russia and the UK recognizing the territorial integrity of Ukraine.

Some experts and Democrats alike are reportedly worried Putin could outmaneuver President Trump. If that does happen, it could place the U.S. at odds with some of its closest allies, further straining relations with Europe. And there's some worry among European leaders President Trump could undermine NATO by ending U.S. involvement in military drills in the Baltics.

At a NATO press conference last week the president wouldn't rule out doing so if Putin asked him to.

Of course, all of this is still up in the air. But The New York Times reports even if Putin doesn't walk away with concessions on NATO or Crimea, the summit is still likely to be a huge symbolic victory for Russia.