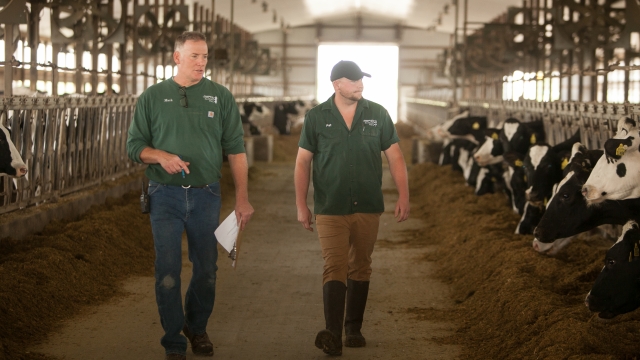 If you can't tell by the name, Crave Brothers Farmstead Cheese is a family farm. Bump into any of the four founding brothers and they'll tell you they're the best, or smartest one.

But no matter who takes the top spot, Charles, George, Thomas and Mark Crave have collectively built a business the entire dairy industry wants to emulate. Both their Wisconsin dairy farm and cheese factory run entirely on renewable energy.

"We're always trying to do more with less, right? It's just kind of how we grew up. Waste not. Want not," Mark Crave said.

The old saying even applies to cow manure. In fact, it's the source behind the farm's power.

Cow manure releases a greenhouse gas called methane. It hurts our atmosphere, but it can be captured thanks to anaerobic digesters, These are massive tanks that store manure, capture its methane and burn it to produce electricity.

"This electricity is all put back on the grid, but it would offset the electricity we consume in our cheese factory and probably be enough extra for about three hundred typical Wisconsin homes," Mark said. "We're offsetting about 50 percent more than we actually use."

The digesters' work doesn't stop there.

"These are separators, and they're taking the liquid manure and they're squeezing the dry fiber out of it," Mark said.

The fiber is thrown into a giant dryer, which is also powered by the digester, and then dropped into a pile.

The manure has very little scent at that point. It's pretty dry, with a little moisture, but it's been completely recycled and reused so it can go back to the cows as bedding.

Nutrient-rich liquid leftover is stored in a lagoon, and later used to fertilize crops for the cows. The process comes full circle – but it's not easy to get up and running.

The Crave Brothers Farmstead Cheese is an absolute success story, but it can't necessarily be replicated on other farms or ranches. You need two main things: Lots of money, and plenty of manure.

The Crave family says selling their electricity isn't lucrative. Instead, the return on investment comes in the form of just knowing they're doing the right thing.

There are other environmentally sustainable methods the brothers use with fewer roadblocks.

"We feed over ten thousand tons a year of co-product feeds that would otherwise end up probably in a landfill," Mark said.

The ingredients are mixed according to a nutritionist's specific meal plan and their 36,000 cows love it.

It's a sustainability success that all four founding brothers – and the rest of the family – can stand behind.