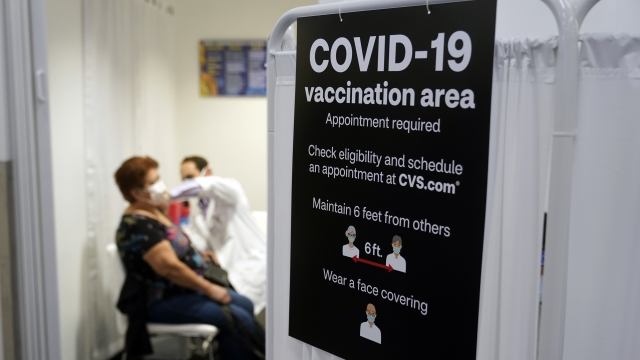 Politicians in Washington, D.C. were among the first in the country to get vaccinated. Now, months later, regular people living here are still struggling to find appointments.

Only about 16% of district residents are fully vaccinated, according to a New York Times analysis. Thirty-nine other states and territories have better rates, including Guam and American Samoa.

"One thing that complicated the rollout of the vaccine in D.C., is that D.C. had to [vaccinate] people from Maryland, Virginia because they work in D.C.," said Rep. Eleanor Holmes Norton.

"I'm particularly concerned about D.C., because D.C. has been very conservative in opening up, and that was the right thing to do. So the more vaccination we have for local residents — not people who work here — but local residents, the better it will be for the 712,000 residents in the District of Columbia," said Holmes Norton.

Some people are choosing to drive hours to get their shot. A group of people recently caravaned three hours to Lynchburg, Virginia, where vaccine appointments were plentiful.

"These vaccines really were available for everybody. We weren't going to be cutting in front of anybody or taking anyone's spot. So we trekked all the way out to Lynchburg," said Isabella Baker, a resident of Arlington, Virginia, a suburb of Washington, D.C. "The Saturday that we went there were over 2,400 appointments available, so there was no trouble with all of us getting the slot that we wanted."

Vaccine access for D.C. residents got a little easier on Wednesday when a new FEMA vaccination site opened nearby off a metro line in Maryland. It will administer up to 3,000 shots per day.

As of Monday, over 190,000 people in Washington D.C. are pre-registered for a vaccine appointment, yet are still waiting to get one.