Experts Say A Winter COVID Surge Is In The Cards 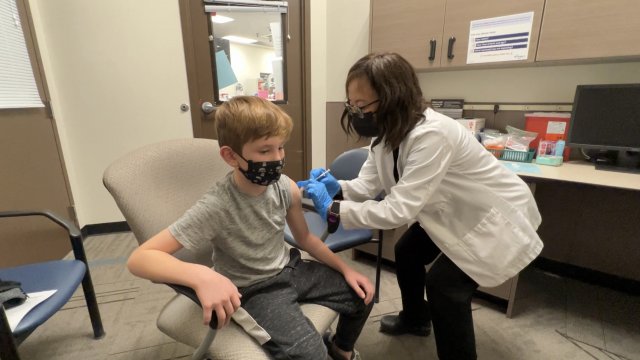 One thing medical experts warn will not take a holiday this winter is COVID.

The numbers have continued to increase, and if anything, they have gotten slightly worse.

Doctors, nurses and hospitals are straining to keep up.

"Right now our hospitals are stretched to a point that we haven't been stretched through the entire pandemic," Cara Welch of the Colorado Hospital Association said. "We are above 90% capacity."

Health experts say the winter surge can be blamed on a triple whammy: colder weather means more people are gathering indoors, vaccine effectiveness is wearing off over time, and compared to last year far fewer people are wearing masks.

There is hope the winter surge won't be as bad as last year now that kids 5 to 11 can be vaccinated. According to the White House, nearly a million that age have gotten the vaccine so far, and COVID-19 response coordinator Jeff Zients says 700,000 additional appointments are already on the calendar at local pharmacies.

In some places like Indiana, demand for children's vaccinations is high.

"We are out of vaccines and unsure of when we will get our next shipment," Stephanie Mellinger, administrator for the Madison County Health Department, said.

But nationwide as people begin to travel and gather for the holidays, only 60% of the population is vaccinated. Experts say that number must go up to drive the number of cases down.

"What we hope to get it at such a low level that even though it isn't completely eliminated, it doesn't have a major impact on public health or on the way we run our lives," Dr. Anthony Fauci, director of the National Institute of Allergy and Infectious Diseases, said.

U.S. health officials are also paying close attention to what is happening in Europe — now the epicenter of global COVID cases.  The World Health Organization is warning countries like the U.S. not to relax public health measures like masking and social distancing, saying the strategy needs to change from reacting to COVID surges to preventing them.