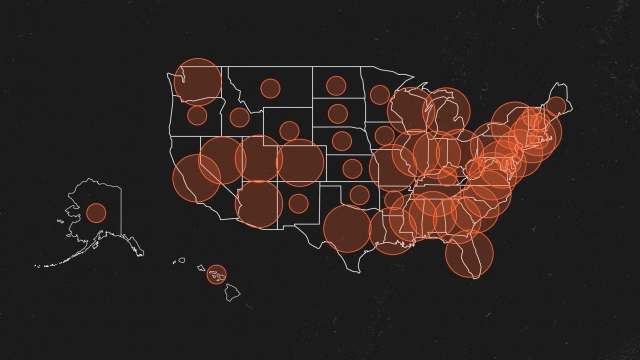 The U.S. now has more COVID-19 infections than any other country in the world.It’s safe to assume that your life has changed a lot over the past few weeks. But exactly how it’s changed really depends on where you live.

"At this stage, you know, as a nation, we're in essence functioning almost as 50 separate nations," said Dr. Boris Lushniak, professor and dean of the School of Public Health at the University of Maryland, and former acting U.S. Surgeon General.

This is Dr. Boris Lushniak. He’s one of the world’s leading experts when it comes to pandemics.

"Almost every big public health event, I was honored to be called into service in one fashion or another. The World Trade Center, the anthrax attacks, Hurricane Katrina, the H1N1 pandemic influenza of 2009. And then as a commander of the Monrovia Medical Unit in Liberia in the midst of the Ebola epidemic," Lushniak said.

But the coronavirus has him really worried.

"My fear is unless we take this much more aggressively, we're going to see further spread. ... Once we overwhelm the medical care system, then all hell is going to really break loose," said Lushniak.

Here at Newsy, we have been tracking, every day, how states, large cities, and the federal government have responded to COVID-19, and how that’s affected the lives of people like you.

One month after the first confirmed case of COVID-19 in the U.S., on Feb. 29, Seattle and King County announced the first COVID-19 death in the country. Governor Inslee of Washington declared a state of emergency.On March 3, according to Johns Hopkins there were 77 cases of COVID-19 in the US, and the CDC announced finding more evidence of the virus spreading, not by travel from outside, but within our own borders.

"You might see some local communities taking specific actions to mitigate the disease. ... What these actions look like at the community level will vary depending on local conditions," said Dr. Nancy Messonnier, the director for the National Center for Immunization and Respiratory Diseases.

The next day, California and Hawaii declared states of emergency. By the time President Trump declared a national emergency on March 13, more than half the states in the union had already declared their own.

“To unleash the full power of the federal gov’t at this time I am officially declaring a national emergency. Two very big words,” said President Trump.

Messaging from the president matters — before the declaration, a handful states had announced they would close schools statewide. Several days later, only a few states allowed districts to stay open.

This is when America started shutting down -- piece by piece.

But Lushniak says at this point, what the country needed was one clear plan for containing the virus.

“Which is we tell people listen, you can work from home, stay at home as much as you possibly can. Here is sort of the essential activities that we'll allow, and here are other things that really are thought of as optional,” Lushniak said.

Instead, we saw a steady stream of announcements of various directives by state and local authorities. On March 17, the governor of Nevada closed all non-essential businesses -- including casinos -- and on March 19, California’s governor was the first to one-up them, closing businesses and ordering residents to “stay at home,” as much as possible.

COVID-19 policy has been a patchwork, left to 50 states with 50 different ideas on when to take drastic action to protect their communities. And it gets even more complicated: some cities and counties have been making their own orders when their state lawmakers haven’t. But to public health experts like Lushniak, this has been the wrong approach to containing the virus.

"I would prefer that we do this as a unified front as opposed to having every single jurisdiction trying to make decisions by themselves. The virus doesn't know international boundaries. Nor does the virus know state boundaries," Lushniak said.

"I cannot control that Tennessee has not taken the steps that we have," said Kentucky Gov. Andy Beshear.

On March 16, Kentucky Governor Andy Beshear shut down bars and restaurants for in-person operations, but Tennessee left theirs open for another week. This left Gov. Beshear in the position of begging Kentuckians not to go to Tennessee, before finally banning all non-essential travel out of state.

"If someone does decide that they want to go out to eat, and goes to a crowded restaurant in Tennessee they bring back that Coronavirus here in Kentucky," Gov. Beshear said.

And If the virus doesn’t know borders, then the best solution is also one without borders.

"Our country is in the midst of a great national trial, unlike any we have ever faced before," President Trump said.

It wasn't until March 31 that the President told Americans that without nationwide "community mitigation" hundreds of thousands more lives could be lost.

"If we really follow the rules, right? The whole rules of social distancing, of sheltering in place, and if the whole world did it right, it would be within 14 plus days, right? And if we took care of all the people who are ill. We could put an end to this rather quickly," Lushniak said.

We’re going to keep tracking how communities respond to this crisis, and how life across America continues. Keep an eye out for future coverage.